The Blue Jays were originally formed in 1959 in Melbourne, where they recorded on the Crest label. Laurie Allen, later of Bobby & Laurie, was their lead singer in the early 60s. They were joined with Brisbane singer Tony Worsley in 1964 to record on Sunshine as The Fabulous Blue Jays. By that time drummer Bob Johnston was the only remaining original member of the band.

Single on Pye label. The B-side was Solomon Burke's Stupidity, a hit in Melbourne for Peter Doyle. The Undertakers also recorded Dessie Rozier's (Do The) Mashed Potatoes, best known in Australia through Billy Thorpe's version.

Jackie Lomax was a member of this Merseyside band. His single of George Harrison's Sour Milk Sea, with George producing and the participation of Ringo Starr and Eric Clapton, was among the first batch of singles released on the Beatles' new Apple label in August 1968.

See the Undertakers page from the British Beat Boom website.

Rosco Gordon, the blues pianist, singer and composer, was one of those unsung musical heroes whose influence on popular music was immeasurable… Gordon's distinctive shuffle, or "Rosco rhythm", had a profound influence on the development of Jamaican music, and was an essential element in the sound of ska, the precursor of reggae.

Single on Vee-Jay by Memphis blues singer-songwriter and pianist (1928-2002). His song No More Doggin', first released in 1952, is often credited as an influence on the development of ska and reggae.

Interviewed for Blues in Britain magazine in 2000, Rosco Gordon said that although Just A Little Bit was unsuccessfully auditioned with Ralph Bass at Federal Records, Federal soon after released a version by Topsy Turvy, without writer's credit to Gordon, and before Gordon released his own version on Vee Jay. 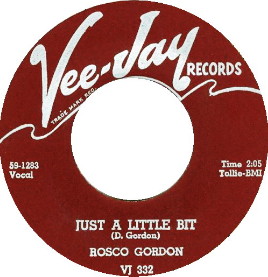 to Just A Little Bit by coming up with the original guitar line.

Just A Little Bit has been recorded by numerous artists, including Them, The Animals, Elvis Presley (1973), Jerry Lee Lewis, Little Milton, T-Bone Walker and Magic Sam.

Further reading: 1. Notes on this song at (i) The Originals© by Arnold Rypens (also lists other versions), and (ii) David Neale's Elvis Presley: The Originals. 2. Audio and label shot (UK reissue on Stateside) at So Many Records, So Little Time. 3. A post on Rosco Gordon at The Hound Blog bravely attacks the complicated story of Gordon's recording career, and includes audio of the key songs, video and images.

Thanks to Mohair for prompting me to look further into the songwriting credits.

Tiny Topsy was Otha Lee Moore Hall (née Moore, c.1930-1964) a Chicago jazz-R&B singer and entertainer. Her husband was Samuel Hall, a disc jockey at the C. & C. Lounge in Chicago where Tiny Topsy was working at the time of her death.

Ralph Bass, whose name appeared in the writer credits, was a Federal Records executive. (Ralph Bass got the copyright on it and he put a bunch of fictitious names on it! – Rosco Gordon, 2000.)

Thanks to David Neale for additional information.

Originally from Brisbane, later based in Melbourne.

Single on Sunshine label, B-side of Early In The Morning (#9 Melbourne, #13 Brisbane).

A live 1965 recording of this song by Adelaide band The Chosen Few was later released by Raven Records on the album Live At Big Daddy’s. Just A Little Bit also appeared on Ray Brown & The Whispers’ 1965 album Hits and Brass.

Thanks to Terry Stacey for clarification.

NOT TO BE CONFUSED WITH
'JUST A LITTLE BIT' BY TONY WORSLEY.

Produced by Mickie Most, written by American producer-songwriter also based in UK Kenny Young, co-writer of The Drifters' Under The Boardwalk and of Reparata & The Delrons' Captain Of Your Ship, to name but two.