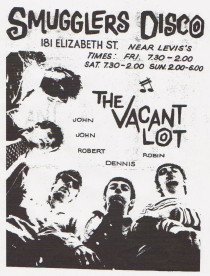 Single on Columbia by Sydney band (not the 80s Sydney punk band).

Image from Robert of The Vacant Lot.

Single on Decca YouTube by West London R&B beat band distinguished by the membership of Ron Wood (later of The Faces and The Rolling Stones) and Kim Gardner (later of Ashton Gardner & Dyke).

There was also an Australian band called The Birds. Two of its members had been in a later, touring line-up of the UK Birds before migrating to Australia. See under I Can't Let Maggie Go for more details.

Single on Motown YouTube written by Eddie Holland with his regular collaborators Brian Holland (his brother) and Lamont Dozier. The team of Holland-Dozier-Holland became famous for the hits they wrote for Motown, but Eddie was also an active recording artist 1958-1964. Four of his singles charted on the Billboard R&B chart, including Leaving Here (#27 R&B) and Jamie, which also crossed over to the Hot 100 (1962, #30 USA).

Scheduled to be released as a single on Stiff in December 1976 but unreleased until a 1978 compilation included it. See notes and comments at 45cat.com YouTube