Single on Columbia by Sydney band. Later anthologised by Raven on the LP Ugly Things, Vol. 1 (though sadly it wasn't on the condensed Ugly Things CD). YouTube 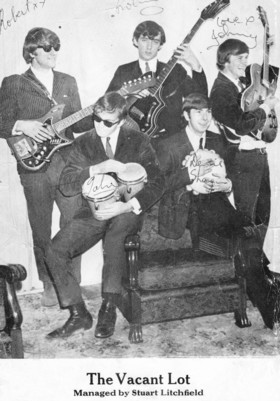 The writing credits here are to members of The Myddle Class, who learnt the song through The Blues Project's live performances of Wake Me, Shake Me. The ultimate source is a traditional gospel hymn (see below).

Don't Let Me Sleep Too Long/Wake Me Shake Me became one of those standard rock songs that are reworked and recorded by a number of bands. According to Professor ZB's Blues Class, Every garage band in existence played their version of Wake Me, Shake Me. Its appearance in Lou Reed's song Wagon Wheel (see below) probably confirms its familiarity among rock musicians.

Image from Robert of The Vacant Lot. Thanks to David Johnston for correcting year of release.

On 1966 album Projections. The session for this song was in August 1966. (An earlier recording appeared on Live At The Town Hall, but wasn't released until after the band had broken up.)

The song was also known as (I Heard Her Say) Wake Me, Shake Me (for example on Blues Project's 1973 album Reunion In Central Park).

An eclectic progressive band with personnel from a variety of musical backgrounds, The Blues Project included Al Kooper, by then an experienced songwriter (This Diamond Ring), session guitarist and keyboardist (Like A Rolling Stone, Blonde On Blonde) who would later found Blood Sweat and Tears. He recorded two albums with Mike Bloomfield (including Super Sessions), signed The Zombies to Columbia Records and produced a number of artists including his discovery Lynyrd Skynyrd.

Apart from stylistic differences and some minor lyrical variations, this is the same song as The Myddle Class's Don't Let Me Sleep Too Long, released earlier in the same year of the The Blues Project's album version.

When the Myddle Class single was re-released on Buddah (1970), it credited the arrangement to Al Kooper and The Blues Project.

Thanks to Chas Kit for clarification via Spectropop Group.

Influential single, a regional hit in parts of America by New Jersey folk-rock band on the Tomorrow label (1966), re-released on Buddah (1970). Although the writer credits are to members of The Myddle Class, the Buddah label also carries the credit Arrangement by Al Kooper and the Blues Project. See Al Kooper’s comments, above.

This version was released earlier in the same year as Blues Projects’ album version.

Tomorrow was the label of Carole King and Gerry Goffin, who wrote songs for The Myddle Class, including collaborations with band members Dave Palmer and Rick Philp. After divorcing Gerry Goffin, Carole King married Myddle Class bassist Charles Larkey, with whom she formed a band, The City.

Philadelphian gospel group The Golden Chords performed at New York gospel club The Sweet Chariot. That is where Al Kooper heard them perform Wake Me, Shake Me, the song he later adapted in a rock idiom for The Blues Project. A Golden Chords version was released on a Live At The Sweet Chariot album on Columbia.

The lead singer of The Golden Chords at this time was soul/r&b singer and songwriter Lorraine Ellison (1943-1985), now remembered for her 1966 r&b classic Stay With Me and a body of work under-appreciated at the time.

The Golden Chords also released at least one single, He Will/Just A Little Courage, on Columbia, 1963.

Thanks to Al Kooper.

A version of Wake Me, Shake Me, Don't Let Me Sleep Too Long on the 1961 album Say No To The Devil.

Rev Gary Davis (1896-1972) was an influential self-taught ragtime guitarist, preacher, street singer and teacher who played in a variety of genres including blues and gospel.

This amounts to a secularised parody of The Staple Singers' Let Me Ride, with the chariots from Swing Low, Sweet Chariot becoming garbage trucks. The familiar Wake me, shake me refrain is transformed into the words of a garbage man worried about losing his job if he sleeps late.

See below for possible indirect influence of Ersel Hickey.

For more on The Coasters, see Poison Ivy.

Incomplete, unreleased track for Epic label, a rock'n'roll version of the gospel song Wake Me, Shake Me (the title is from its line Got to get to heaven in due time). According to Bear Family liner notes, it may have led to The Coasters' Wake Me, Shake Me after Ersel Hickey played his recording to their producers Jerry Leiber and Mike Stoller.

Rockabilly singer and composer Ersel Hickey (born O'Hickey, 1934-2004) had sung in a gospel group before turning to rock'n'roll. His best known recording is of his own song Bluebirds Over The Mountain (1958), later recorded by The Beach Boys. He also co-wrote The Serendipity Singers' 1964 hit Don't Let The Rain Come Down (Crooked Little Man).

Biographies of Ersel Hickey usually mention his 1958 publicity photo by Gene LaVerne which has become an iconic image of studied 50s rock'n'roll attitude.

References: 1. Ersel Hickey features at Rockabilly Hall Of Fame, Spectropop and All Music Guide. 2. Rockin' Country Style has a song list with some audio clips and label shots.

This reworking of Swing Low Sweet Chariot includes the refrain Wake me, shake me/ Don't let me sleep too late/ Tryin' to get to Heaven in due time/ Before the Heaven's doors close.

One of a number of tracks unreleased until the 1990s but recorded 1953-1957 by gospel group first formed in the 1930s and continuing in one form or another to this day.

This swinging gospel recording includes several lyrical elements found in other variations: Tryin' to get to heaven in due time/ Just before that heaven door closed… (I heard her say) Wake me, shake me/ Don't you let me sleep too late… Wake me in the morning/ Let me swing on the golden gate…

The Wright Brothers Gospel Singers - Wake Me, Shake Me, Don’t Let Me Sleep Too Long (1940)

This seems to be a well-known version, possibly influential in its structure, lyrics and melody. Released on the Bluebird label.

The lyrics include Wake me, shake me/ Don't let me sleep too late (cf. Fiddlin' John Carson's 1927 recording) as well as Tryin' to get to Heaven in due time/ Before the Heaven's doors close (as in the Pace Jubilee Singers' recording, also 1927). In future versions, with variations, these lines are standard.

This is the earliest recording I know of that has both the familiar Wake me/ shake me refrain (albeit reversed as Shake me, wake me) as well as Don't let me sleep too late. (It continues I'm goin' away in the morning/ Gonna swing on the golden gate.)

There is a direct line from this energetic, rhythmic recording to the rock versions of the 60s, more so than in the hymn-like Pace Jubilee Singers variation, also from 1927. This isn't yet Wake Me Shake Me/Don't Let Me Sleep Too Long, the song we know from Blues Project/Myddle Class/Vacant Lot, but there is clearly a family resemblance.

No doubt there are other – even earlier – variations to be found. Certainly, the theme of Heaven's golden gates is common in gospel music: take, for example, Ernest Hare's 1928 recording on Champion, Keep Dem Golden Gates Wide Open For Me.

55-year-old Georgian cotton mill worker Fiddlin' John Carson (1868-1949) released Little Old Log Cabin in the Lane/The Old Hen Cackled on Okeh in 1923. John Bush at All Music Guide notes that this was the first recording by a strictly country artist and arguably the beginning of the country music recording industry.

Recorded March 1927 for the Gennett Label.

Although this is a close relation of Wake Me, Shake Me, it has a more stately traditional hymn tune, without the gospel rhythm of Wake Me Shake Me. The familiar lines Tryin' to get to Heaven in due time/ Before the Heaven's doors close are here, but not the Wake me, shake me refrain.

[traditional Gospel Songs] - For example: Wake Me, Shake Me, Don’t Let Me Sleep Too Long

It would take a scholar of gospel music to sort out the strands, but there are a number of thematically and lyrically related – if not identical – hymns or gospel songs with such titles as Heaven’s Door’s Gonna Be Closed, Wake Me Shake Me, Tryin’ To Get To Heaven In Due Time, Due Time, Don’t Let Me Sleep Too Long, Gonna Swing on the Golden Gate and Swingin’ On The Golden Gate.

In addition to those listed on this page, there are recordings by The Consolers, Marion Williams, The Sensational Statesman Quartet with Hovie Lister, Brother Joe May, Isaiah Owens, and no doubt many others.

Not the same song as ‘Wake Me, Shake Me’ or its variations.

Interesting that Fiddlin’ John Carson on his 1927 recording, discussed above, also sings Shake me/ wake me instead of Wake me/ shake me.

Single on Mainstream by Connecticut band.

Listen at Spin The Groove.

Single on Quality. This is not the Four Tops track of this name, but a variation of the title Wake Me Shake Me. The influential version is Don’t Let Me Sleep Too Long by The Myddle Class whose members are credited as writers on the this single.

Thanks to Andy at Spin the Groove [homepage] for version alert.

Listen at Spin The Groove.
Label shot at Rate Your Music.

The last minute of the song is given over to the chorus of Wake Me, Shake Me: Why don't you wake me, shake me, please don't let me sleep too long.