Terry Walker had been in Ray Hoff & The Offbeats 1960-62. He was then in The Hi-Five until 1964, a band he later rejoined, sharing lead vocals with Glen Ingram. Tyler and Sheridan were both foundation members of The Hi-Five.

Walker later joined top Melbourne band The Strangers when they were at their late-60s peak, and sang on Love Machine (1968) by studio band Pastoral Symphony.

For more about The Times see the A-side, Tender Feeling.

For more about The Hi-Five see Skye Boat Song.

In Melbourne, Brisbane and Perth this was a double-sided hit; in Adelaide only The Minute You've Gone charted; and in Sydney neither charted.

Out of the same sessions came Angel and Just Another Guy, two songs that charted in Australia but not in the UK.

Earlier in the month, on 19 and 21 August, Cliff Richard had recorded some tracks at Columbia Studios in New York, produced by Bob Morgan. 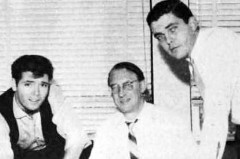 At this time Bob Morgan was Executive A&R Producer at Epic Records in New York. He produced  major artists at a number of labels over the years, including Bobby Vinton's hits on Epic beginning with Roses are Red (My Love) (#1 USA). In July 1964 Billboard reported that Morgan had met with Cliff Richard and his producer Norrie Paramor in London to discuss upcoming US recording sessions and repertoire for Richard. [Image: Richard, Paramor, Morgan at EMI London]

Co-producer Billy Sherrill (1936-2015) was a notable Country producer, A&R man and songwriter best known for his career-building work at Epic in Nashville with Tammy Wynette and Charlie Rich . His co-writer credits include Wynette's Stand By Your Man (1968) and Rich's The Most Beautiful Girl (1973).

Just Another Guy was recorded a couple of years before the composer, Neil Diamond, charted with Cherry Cherry (#6 USA, his first Top 40 hit), and with his composition I'm A Believer by The Monkees (#1), both in 1966. He later became a major artist, with many hit singles 1966-1982 and a double live album, Hot August Night (1972), that broke sales records in Australia.