Single on Festival, June 1968, by a purpose-formed studio band that included all of The Twilights and The Johnny Hawker Band among others. YouTube

Vocals by Terry Walker, previously with Glen Ingram & The Hi-Five (though not on Skye Boat Song), also heard with The Strangers on Happy Without You. 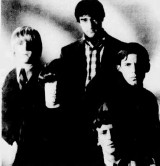 Single on Philips YouTube, December 1967, by folk-rock-influenced band formed in 1964 by young high school friends in Westchester, a Los Angeles suburb. The original line-up was Ray Mangigian (lead vocals, harmonica), Levitt Earhart (rhythm guitar), Tim Ward (lead guitar, vocals), Floyd Fletcher (bass, vocals), and Jim Peters (drums). The band continued for a while with replacements for Earhart and Ward after they were drafted in 1968.

The record appeared on regional surveys in a number of US cities, including Muncie Ind., Ogden Utah, and Hartford Conn. but reached only the outer edges of national US charts (90s-100s).

The writers:
Although The Roosters performed and recorded original songs written by band member Tim Ward, Love Machine was written by Michael Gordon, whose credits include The Marketts’ surf instrumental The Outer Limits; and James Griffin, later a founding member of Bread. Gordon and Griffin also wrote for a 1968 Roosters single on Philips.

Sources, further reading: 1. Details about the band are gleaned from a post at Colin Mason’s blog Opulent Conception which includes a detailed interview with lead vocalist Ray Mangigian along with other content. (2021: The blog post was here but is now marked as “open to invited readers only”.) 2. See also Charles G. Hill’s useful notes on The Roosters and this song at his Single File pages. 3. Roosters singles discography at 45cat.com. 4. Co-writer Michael Gordon has posted the song to YouTube along with his commentary.