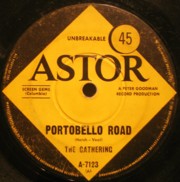 Single on Astor. The label's writer credit to 'Harsh' is an error. Vocals by Col Perkins who also wrote the B-side, Get Ready For Me.

The Gathering had the original single by The Spectrum as a reference, thanks to Perkins's brother who would ship him the latest singles from England. This wasn't a slavish copy of the original's wistful Toytown sound, though: the Aussies made it their own with stronger rhythm and lead vocals.

Thanks to Col Perkins for band history, and to Trevor Gordon and Peter Foldy for clarification. Thanks to Mike Robbins.

This is UK band The Spectrum, not to be confused with progressive 1970s Australian band Spectrum.

The Spectrum played the theme on Captain Scarlet & the Mysterons, an animated TV series by Gerry Anderson in which the Spectrum Agents were the good guys (see, for example, the fan site Spectrum Headquarters).

The band's biggest chart success was in Spain, and Portobello Road failed to chart in spite of extensive airplay on pirate station Radio London.

There are contrasting views of The Spectrum's origins. According to RadioLondon.co.uk the band was originally formed for Captain Scarlet, but as Paul Cross at Sweet Floral Albion tells it the band was already formed and was appropriated for the TV series. On the other hand, Bruce Eder at All Music Guide sees The Spectrum as a manufactured group, reportedly put together by British RCA to see if they couldn't come up with a U.K. equivalent of the Monkees.

The final word may go to Scott Swanson in a detailed post to Spectropop Group: while it is true that Anderson signed The Spectrum to record a version of the Captain Scarlet Theme Song, I suspect that the name duplication was mere coincidence — and Anderson only hired the band to avoid a lawsuit! Swanson also points out that The Spectrum pre-dated The Monkees, even though RCA may have signed them "with the Monkees in mind". (Spectropop message #47047, 24 June 2010, recommended reading.)

Single on Jamaican label Studio One, written by major reggae-ska producer known as Coxsone Dodd or Sir Coxsone (1932-2004, b. Clement Seymour Dodd). The Jamaican release was a B-side of You Don't Love Me by Dawn Penn. Also released in UK as Porta Bella RD, with a blank B-side [label shot].

Further reading: Studio One discography & label shots at Rougher Yet.

From the 1971 Disney film Bedknobs and Broomsticks.