Second single, the first that charted by Melbourne band influenced by British Invasion insects, also notable for the involvement of Ronnie Burns, who later became a solo pop star. Go to Browse Artists: ‘B’ for some of his songs featured at this site.

Doin’ The Mod charted in June-July 1965 and was followed onto the Melbourne charts in September-October by Can’t You Feel, an original song by Ronnie Burns and John Thomas of The Flies (#26 Melbourne).

Where Are They Now? Themi Adams (Adamopoulo), the Flies’ bass player, is now an Orthodox priest working in Kenya. See the website of Paradise4Kids, an African children’s charity of which Fr Themi is a partner.

Thanks to Terry Stacey for uncovering all these Flies. 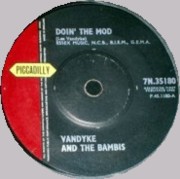 Single on Picadilly. According to AMG, an obscure British band teamed with songwriter Les Vandyke: my hunch (and it is only a hunch) is that this is a studio band.

British songwriter, singer and film composer Les Vandyke (b. Yani Skoradalides, 1931) also used the names John Skoradalides, Johnny Worth and John Worsley. He wrote many well-known songs of the 60s and 70s including significant hits for Adam Faith (What Do You Want, Poor Me) and Eden Kane (Well I Ask You, Forget Me Not). Ex-Shadows Jet Harris & Tony Meehan had a UK hit with his Applejack (1963, #4 UK).

Further reading: 1. 45rpm.org.uk’s outline of Les Vandyke’s career, including a label shot of his early single, as Johnny Worth, on the UK budget label Embassy. 2. Les Vandyke bio at All Music Guide. 3. John Worsley film scores listed at IMDb.

Label shot: thanks to Vicious Sloth Collectables. Thanks also to Terry Stacey.