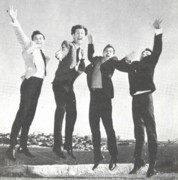 Sydney vocal group The Delltones, featuring the bass of the ironically nicknamed 'Pee Wee' Wilson, were a fixture of the Australian rock'n'roll scene from their formation in 1959. Their official site is at www.delltones.com.

Country singer and songwriter, known as Whispering Bill Anderson, charted in Australia with Still (1963) and Mama Sang a Song (1962; Walter Brennan also had a charting version here). A parody of Still by Don Bowman was also played on Australian radio.

Thanks to John Yeager for suggesting this one.

Sydney studio band successful in 1968 with a version of The Lion Sleeps Tonight that charted Top 10 in Sydney and Brisbane.

On 1980 Columbia album I’ve Got Something To Say.