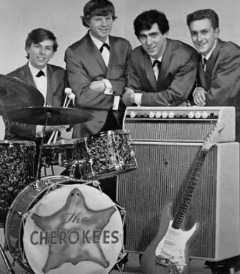 Originally a high-quality instrumental guitar band, Melbourne's Cherokees were formed in 1961 by Billy Dale and Barry Windley who had been in Johnny Chester's backing band The Chessmen.  By the time of this single, the line-up was Dale (lead guitar), Windley (drums), Doug Trevor (bass) and Lindsay Morrison (rhythm guitar).

Doug Trevor composed the A-side, Running Wild. In his previous band, The Marksmen (Melbourne), he had written two of their three singles that charted in Melbourne YouTube. His later career included further success as a composer and as manager of such country artists as Gina Jeffreys and Troy Cassar-Daley.

Like many other Shadows-styled instrumental bands of the pre-Beatles era, The Cherokees began recording more records with vocals. Now released on the pop-savvy Go!! label, their repertoire extended to such material as Curtis Mayfield's I've Been Trying (1965), first recorded by Jerry Butler, and The Beau Brummels' British Invasion-styled That's If You Want Me To (1965).

Later, with some further line-up changes, they branched out into droll old-time revivals with their hits Minnie The Moocher and Oh Mona, a complete contrast to the earlier guitar instrumentals. Their line-up at that time (1967) left Doug Trevor with Pete Tyndal, Peter 'Max' Bilney, Kevin Smith and Marty Van Wynk

Further reading: For more on Australian instrumental bands who got hip to the British Invasion, see my blog post Bizarro Shadows World Down Under.

The brothers were born in Prescott, Arizona, but moved around, ending up in San Mateo, California. They first played in a Palo Alto area country dance band in 1950 when they were still in their teens. They recorded some 45s as The Five Whispers, The Tides and The Triplets, but later in the 60s they returned to their origins as Western swing and country artists in The Country Cut-ups and as The Black Brothers.

On their pop singles the Black brothers played guitar instrumentals like this one, but they also sang, as heard on their singles as The Tides on Dore 1959-61 YouTube .

Gently, My Love, their 1960 instrumental singleas The Triplets, also on Dore YouTube, has both sides written by the brothers with Jack Greenbach (co-writer of Moon In The Afternoon). Greenbach also plays drums on the recording [45cat notes], thus completing the three "triplets".

Mel Larson (another co-writer of Moon In The Afternoon) played keyboards with Larry & Bobby Black in The Country Cut-ups: see their 1965 album Corn Shuckin' Time.

In 1971 Bobby Black joined country rockers Commander Cody and His Lost Planet Airmen on steel guitar. He has also played with Asleep At The Wheel and The New Riders of the Purple Sage. 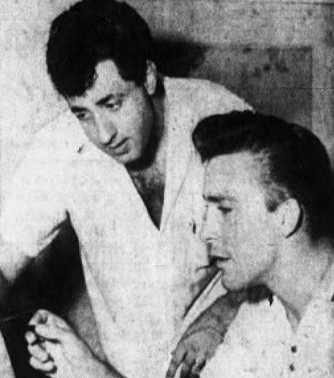 The writers: Jerry Marcellino and Mel Larson were in The 3 Honeydrops, formed  in high school with another student who was later replaced by Jack Greenbach. There were two 3 Honeydrops singles on Music City (1957), and another on Era as The Naturals (1959). After the group split, Marcellino and Larson continued to perform and write together, and they released an obscure single as Mel & Jerry on Boss-Sound. A single on Dore (1962) by Mel, Jerry & Jack would be the old trio again, reprisng one of their Era sides from 1959. Marcellino and Larson were hired as songwriters at Motown and also produced there, working with many big names, notably The Jackson 5 and Michael Jackson.