Double-sided hit in Melbourne and Perth with Answer Me.

Grantley Dee (1946-2005) was a popular Melbourne disc jockey and singer who worked on radio at 3AK Melbourne and later at 7EX Launceston. He had six charting singles in Melbourne in the late 60s. See also Wild One (1966).

See the Rockabilly Hall of Fame’s Grantley Dee page for a comprehensive biography.

Single on Columbia by Adelaide band whose line-up included Idris Jones, later of The Mixtures, and his brother Evan. The Jones brothers wrote The Mixtures’ hit The Pushbike Song (1970).

Not to be confused with Melbourne contemporaries The Gingerbreadmen. 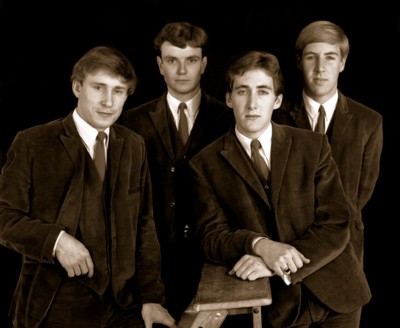 Image: Thanks to Evan Jones.

Single on New York label Old Town by versatile pop/r&b singer whose only hit was this song.

Produced by the song’s co-writer Henry Glover (1921-1971) who had a varied career, working (for example) as a record executive, producer, arranger, A&R man and writer. One of his compositions was Drown In My Own Tears, a soul classic recorded by many, notably Ray Charles and Joe Cocker. See Steve Huey’s comprehensive biography at All Music Guide.

This is Billy Bland: not to be confused with Bobby ‘Blue’ Bland.