See also the B-side, I Was A Fool For Leaving, and another single, Never Like This/What’d I Say.

Pop-rock singer Del Juliana (1942-2012, b. Delores June Giuliani) was born and grew up in Maroubra, New South Wales, where she also lived as an adult. She released two singles and was a familiar solo artist on TV pop shows. She passed away in Sydney in August 2012 (see Vale Del Juliana at the Support Act website).
Del Juliana has gone down in history as the singer who almost supported The Beatles on their 1964 Australian tour. Whether she pulled out or was overlooked is unclear, but her place seems to have been taken by Johnny Devlin.

According to Teenagers’ Weekly, 16 October 1963, Del Guiliani (as her name is still spelt there) was signed to Channel 7 Sydney in 1962 on a five-year contract after she had appeared on Sing Sing Sing, the program that had replaced the Johnny O’Keefe Show from October 1962.

In their book Behind the Rock, Jon Hayton and Leon Isackson tell the story of how their band The R’Jays (soon to be The Rajahs) booked Del Juliana to appear with them at the Snowy Mountains Hotel in Cooma early in 1964. She appeared at a 2002 memorial concert for Dig Richards.

At YouTube: Del Juliana singing Mockingbird with Johnny O’Keefe, some time before his hit version with Margaret McLaren.

Thanks to Belinda and ‘jargonise’ at MusicPopHits MSN group.
Teenagers’ Weekly reference from Zbigniew Nowara. When Del Guiliani/Juliana joined Sing Sing Sing it was being compered by Lionel Long, but Johnny O’Keefe took over as compere early in 1963 when he returned after illness (Damian Johnstone, The Wild One).

Thanks to Steven Richards for further information, and to Rob for straightening out my maths. 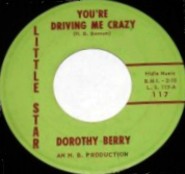 Dorothy was married to Richard Berry, writer and originator of Louie Louie. She was a member of The Raelettes and also released at least eight solo singles 1962-1971, mainly on Little Star, but also on Unity, Challenge, Planetary and (last of all) Tangerine, owned by Ray Charles.

You're Driving Me Crazy was produced by the composer of the song, H. B. Barnum (b. Hidle Brown Barnum, 1936), active since the 1950s as an arranger, producer, singer, songwriter and actor.

H. B. Barnum's song Since I First Met You (1957), recorded when he was a member of The Robins, has been used in several movies including Pulp Fiction.

Other Dorothy Berry songs: There's a Dorothy Berry track on Ace Records' Phil's Spectre: A Wall Of Soundalikes: You're So Fine, produced by David Gates on Challenge (1963). You're So Fine and its flipside, Cryin' On My Pillow are (unaccountably) on Vols 1 & 2 of the Nashville Country Gals collection [Amazon link].

YouTube: Dorothy Berry in the Raelettes with Ray Charles, 1972.

Similar title but not the same song as "(I Say) You’re Driving Me Crazy" by Del Juliana.

Much-recorded song, originally by Rudy Vallee in 1930, and a hit that year for Guy Lombardo. Full title You’re Driving Me Crazy (What Did I Do). Also recorded in Australia by Frankie Davidson (1960).

Not to be confused with "(I Say) You’re Driving Me Crazy" by Del Juliana.

Not to be confused with "(I Say) You’re Driving Me Crazy" by Del Juliana.

Single on Philips by Sydney band: see Nervous Breakdown. This is a band original written by bassman Baden Hutchins.