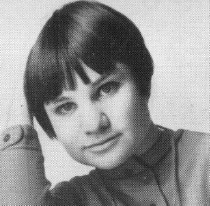 Brand New Woman (1966, #46 Melbourne) was an original song by Peter N. Pinne who, with Don Battye, has written a number of stage musicals, as well as the Sons And Daughters theme song.

See also Cheryl Gray's It's Not Easy Lovin' You (1967, #34 Adelaide #11 Perth), also written by Jackie Trent and Tony Hatch, and first recorded by Jackie Trent; and The Real Thing, another charting record by Cheryl Gray.

Single on Pye label by early 60s teen idol, best known for his 1962 hits Venus In Blue Jeans and Go Away Little Girl.

Prolific songwriter, arranger, musical director and producer Tony Hatch wrote most of his songs with his wife, singer Jackie Trent. He was the musical brains behind Petula Clark’s mid-60s career revival and was responsible for her run of hit records from Downtown (1964). Hatch and Trent also wrote the theme to the TV series Neighbours.

Tony Hatch also had a hand in the original versions of One In A Million by Bev Harrell and Heart by Lynne Randell. He produced The Montanas’ version of Ciao Baby, a song better known in Australia through Lynne Randell’s version.