Last single, on Sunshine, by New Zealand band that had relocated to Sydney. By the time of Kicks, The Librettos were based in Melbourne, but it was recorded at Festival Studios in Sydney with producer Pat Aulton.

The band was down to a trio after the return of Lou Parun (front of photo) to New Zealand. The Librettos broke up when two other members, Rod Stone and Brian Peacock, left to join Normie Rowe's Playboys in England (see Ooh La La, It's Not Easy and Going Home). 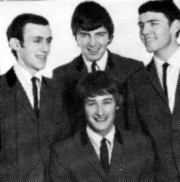 Later, Rod Stone was a founding member of the Groove and Brian Peacock co-formed Procession.

On the Liberty album This Is My Bag.

Kicks was also recorded in the 60s by surf instrumental band The Challengers (released 1994 on Killer Surf); by The Gants (2000 bonus track to 1986's retrospective I Wonder); and by The Wheels, a Belfast band with Them connections (released 1997 on Ace Records' Belfast Beat Maritime Blues).

Recommended reading: And The Music Plays On, Rene De Bruin's guide to Del Shannon at Soundscapes.

The Raiders first charted in 1961 with an instrumental, Like, Long Hair and had their last big hit in 1971, a #1, Indian Reservation (The Lament of the Cherokee Reservation Indian), written by John D. Loudermilk. They were known for their 18th century costumes (worn in keeping with their historical name) and for their weekly appearances on the TV pop show Where The Action Is.

There was a Paul Revere, on keyboards, the foundation member, but the lead singer was Mark Lindsay, who had a career of his own, charting in 1970 with Arizona and Silver Bird.

By the time of Indian Reservation the band had split, leaving Lindsay and Revere with new personnel as simply The Raiders. (Source: ER2).

Recorded by Monkees Micky Dolenz and Peter Tork in 1986.

In some people's minds, Kicks is associated primarily with The Monkees (lyrics sites often list it as a Monkees song), and there is a common misconception that this is a Monkees oldie from the 60s. It isn't, but it was added to a 1986 Monkees oldies album, Then And Now: The Best Of The Monkees, so the confusion is understandable.

See the discussions at alt.music.monkees from May 2005 and January 2004. Peter Tork is quoted as saying, I was so annoyed with them having us do 'Kicks.' I told them it would be like making the Beatles do 'Ferry Cross The Mersey' on their reunion album.

On album Skin It Back.

Also recorded, for example, by rock band Earth Quake (late 70s); by punk revivalists Naz Nomad & The Nightingales (1984 on Give Daddy The Knife, Cindy); by jazz guitarist Mimi Fox (1999 on Kicks); and by hard rockers Razmanaz (2003 on Razmanaz).

Paul Revere & The Raiders’ bassist Paul ‘Fang’ Volk also released Kicks with his band Fang & The Gang in 2005 on Fang Reveres The Raiders.