Single on Festival, B-side of Good News. Both sides of the single were originally by The 5th Dimension. 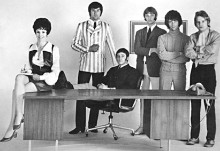 On Festival album On "Bandstand" by polished Sydney band with fine pop sensibility, formed by vocalist Carole King with her husband Brian in 1966.

For more information about band history and personnel, see for example It's A Happening World.

Their only US hit single was The Worst That Could Happen, (1969, #3 USA). Like Requiem: 820 Latham it was written by Jimmy Webb, and first appeared on The 5th Dimension's Magic Garden.

On Soul City album The Magic Garden by versatile pop-soul vocal group (they were previously called The Versatiles) formed in 1965.

Requiem: 820 Latham is one of Jimmy Webb’s strangest and most wonderful songs, like a darker, less familiar sibling of MacArthur Park. The lyrics are about the cataclysmic grief of unrequited love, artfully expressed by the lead vocals of Billy Davis Jr. .

Single on Capitol, also on album Raindrops Keep Fallin' On My Head.

Mel Tormé (1925-1999) was a jazz musician with diverse skills but he was best known for his singing which earned him the nickname The Velvet Fog. Among his accomplishments was composing the music and co-writing the lyrics of The Christmas Song [Chestnuts roasting on an open fire], but he was also a drummer, arranger and author.

Tormé favoured the jazz standard or the "Great American Songbook" but from the late 60s he included a number of current pop hits on his albums, including compositions by Billy Joel, Stevie Wonder, Janis Ian, and Bacharach & David.

Single on Attarack by former Disney Mouseketeer, later lead singer and drummer with The Standells, heard on their hit Dirty Water (1966, #9 USA).

On ABC album His Greatest Performances by British stage and screen actor (1930–2002).

As a singer Richard Harris had one big hit, with Jimmy Webb's MacArthur Park (1968, #2 USA, # 4 UK). It makes sense that he would also record Requiem: 820 Latham, another operatic Jimmy Webb composition.