Single by Sydney band, one of two on Festival.

Ian McFarlane notes that although The Clik's singles from 1969-70 were "bubblegum pop", the band later "moved in a hard rock direction" with replacement personnel Garry Adams then Justin McCoy (guitar), Phil Cogan (bass), and Doug Bligh (drums) joining Millo from 1972. Spencer et al in their Who's Who also list Brian Kirby (drums) and John Nichols (vocals) as members at unspecified times.

From the late 70s Millo composed many notable cinema and TV soundtracks, beginning with the series Against the Wind (1978), and including his award-winning scores for The Lighthorseman (1987) and the series Brides of Christ (1991). He has released several solo albums of original works.

Jon English and Mario Millo had a Top 5 hit in Australia with English's composition Six Ribbons (1978) from Against The Wind, a TV series that was scored by Millo. Both artists had been in Sebastian Hardie though at different times. 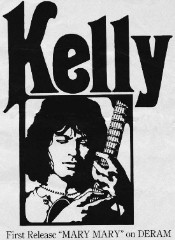 Written by Honeybus's Ray Cane who also produced and arranged the single.

Although highly regarded then and now, Honeybus's only UK hit was I Can't Let Maggie Go (1968, #8 UK). Their song (Do I Figure) In Your Life (1967) is familiar to many through the 1969 version by Joe Cocker as Do I Still Figure In Your Life? YouTube. Both songs were written by Pete Dello [b. Blumson], who left the band during 1968 and was replaced by Jim Kelly.

SAME TITLE BUT NOT THE SAME SONG AS
'MARY MARY' BY THE CLIK.

Single on Sunshine, also in UK on Polydor, B-side of It's Not Easy, a double-sided hit in Perth. Elsewhere, It's Not Easy alone charted (#5 Sydney #3 Melbourne #2 Brisbane #6 Adelaide #21 NZ).

As far as I can tell, this was the original recording of this Mary, Mary.

For more details, see under It's Not Easy, and under Ooh La La, another Normie Rowe hit recorded in London and written by two of these writers, Shaw & Keene.

SAME TITLE BUT NOT THE SAME SONG AS
‘MARY MARY’ BY THE CLIK.

On 1967 Colgems album More Of The Monkees, also on a single in several countries including Australia (1968).  It doesn’t seem to have been on a US single in the 60s, unless you count a cereal box giveaway in 1969.

First released by The Butterfield Blues Band on East-West (1966).

SAME TITLE BUT NOT THE SAME SONG AS
'MARY MARY' BY THE CLIK.

There are many songs with Mary Mary as a title or part of a title, no doubt because the phrase is familar from the nursery rhyme Mary, Mary, Quite Contrary. See, for example, these search results from 45cat.com.