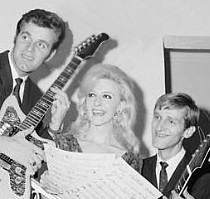 Single on RCA Australia #101584, B-side of Since I Fell In Love With You. This was the the first single by family pop group from Sydney. Marijke Bakker and her brothers John & Norman were originally from The Netherlands.

Sherrill Roecker (c.1942-2004) was from Merchantville, New Jersey, just over the river from Philadelphia where Swan Records was based.

Her father was Eddie Roecker (c.1910-1975), a light classical singer who performed locally and on tour. He appeared on Broadway and on radio, and he had a TV show in the early 50s, Eddie Roecker Sings, on Philadelphia's WFIL, Channel 6. He released at least one record, on Robin (Billboard 17 Feb 1951).

This artist biography is my work, based on my original research. If you use it, please credit me or my website. ©Lyn Nuttall 2017

A Merchantville High School graduate's singing career will be launched Monday with the release of her first recording, hopefully entitled "Love Me." ¶ Pretty 22-year-old Sherrill Roecker is determined to follow in the footsteps of her father, Eddie Roecker, an actor and frequent master-of-ceremonies for Merchantville functions. ¶ Sherrill has no illusions of an easy path to fame. ¶ "I travelled all over the country with my father for 13 years when he was on the road," she said. "I know how tough it is."

Both sides of the single are co-written by Philadelphian pop songwriter and producer Joseph Ricci (1938-2008) who in the late 60s moved to Nashville to work in country music. He was better known as Ricci Mareno, under which name he wrote songs recorded by some major country artists, often in collaboration with Jerry Gillespie or Charlie Black. He wrote or co-wrote a number of songs for Tommy Overstreet including – with Gillespie – Gwen (Congratulations), covered in Australia by Johnny Chester.

Ricci's co-writer on the B-side, It's all Over, is Dante Storace who recorded as Dante*, for example on How Much I Care (1960). another Ricci – Dorace composition (with Jimmy Testa), arranged & conducted by Ricci on Mercury.

*This Dante is not Donald 'Dante' Drowty of Dante & The Evergreens ('Alley Oop'), as some may suppose. See the posts by Davie Gordon at Spectropop and 45cat.

Further reading: Joseph R. Ricci's obituary at Find A Grave gives a good overview of his working life as Ricci Mareno. He was prolific: he has 22 pages of credits at Discogs.com.