Both singers were releasing solo singles on HMV around the time of the Ted & Ray single. Ted and Ray each had an HMV single reviewed on the same page of the Women's Weekly in December 1959 [Trove]

References: 1. HMV (Australia) discography at Global Dog. 2. Tell Her No at Platter-saurus database, supported by reliable anecdotal evidence given to me. 3. Australian Women's Weekly, 16 December 1959 [Trove].

The Unichords released a couple of singles on W&G around this time, and were credited on records by Frankie Davidson, Heather Horwood and Denis Gibbons.

Live performance on TV's Town Hall Party, once immortalised via YouTube but removed for copyright reasons.

Initially reported by Billboard, 16 March 1959, as having been "recalled" by Liberty, but by the 13 April edition it was being listed as an available version [Google books]. The other side of the single was A Boy And A Girl.

Radio: This had some airplay on WJJD Chicago. See the charts from March-May 1959 at ARSA.

Single on New York label Bullseye, released around the same time as the version by Travis & Bob (both were reviewed in Billboard on 9 March 1959).

Dean and Mark Mathis were from Hahira, Georgia. They later formed The Newbeats with falsetto lead Larry Henley and had a number of charting singles, beginning with Bread And Butter (1964, #2 USA).

Radio charts: This version had some airplay in the US, going by these radio station charts at ARSA.

Travis Pritchett (1939-2010) and Bob Weaver (b.1939) were from the small town of Jackson, Alabama. Tell Him No was their only hit, although they recorded a few more singles before breaking up. 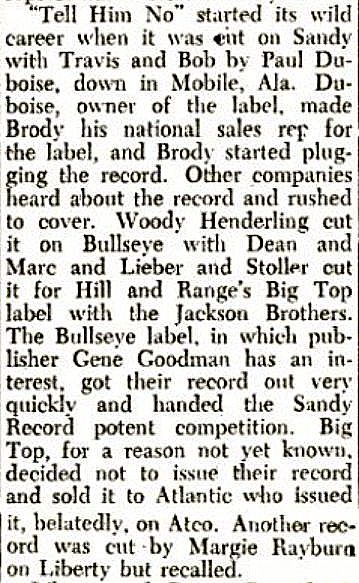 Jim Carlisle - Tell Him No

Rockin’ Country Style dates this as 1965 or later.