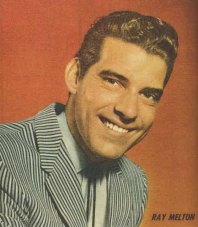 Single on Teen by Ray Melton (c.1939-1964). Orchestra conducted by Bob (Beetles) Young. The A-side of the single, The Key, charted in Sydney.

Melton was probably Ray of Ted & Ray: see their popular 1959 record Tell Him No.

Sydney-based Ray Melton appears to have been active as a singer from the mid-50s to the early 60s. He released a number of records 1956-1961 on the Prestophone, HMV, Leedon, Teen and Festival labels.

The Teenagers’ Weekly pages in The Australian Women’s Weekly gave some biographical details in February 1961: Sydney’s Ray Melton is a TV, radio, and recording star with a difference – he’s also an interior decorator for a hotel-owning brewery. Ray came here from Hongkong as a baby, went to school in Wollongong… In July 1961 the Weekly reported that Melton and his mother had moved into a house in Bondi with a rosewood grand piano and a german shepherd called Key, named after his master’s record The Key.

Not to be confused with Ray Melton (c.1939-2021), US country-rock singer from Murfreesboro, Tennessee, known for Boppin’ Guitar (1960), on Nashville label Image. He seems to have performed in the 70s and 80s as Little Ray Melton, mainly in Panama City, Florida.

There was also a Ray Melton & His Country All Stars, who released She Hit The Ceilin’ (When I Hit The Door) in 1951. I’m assuming that’s yet another story, although it was on a Nashville label, Bullet, so perhaps there’s a family connection with young Ray.

Single on Columbia by country & gospel singer b. 1926.

Same title but not the same song
as "Chain Gang" by Ray Melton.

Same title but not the same song
as "Chain Gang" by Ray Melton.

Again, this is not the Sam Cooke song, but another US-charting Chain Gang on ABC, by the co-writer of A Taste Of Honey and He Ain’t Heavy, He’s My Brother. Charted January 1956.