Single on Sunshine label by wild, progressive Melbourne R&B band formed by Doug Ford and Andy James after the break-up of Sydney band The Missing Links (see under Nervous Breakdown).

Not to be confused with Running Jumping Standing Still Band, a project of British songwriter John Carter, who issued the 1969 single Aye-Oh/Why Be Blue under this name. More about John Carter and associates at Knock Knock Who's There by Liv Maessen.

Laurence Urdang, A Dictionary of Names and Nicknames (1991)

Single on A&M label. Some copies (including the Australian issue on Festival) mistakenly credit ‘A. Christensen’ as the songwriter. See label shots at Captain Beefheart Electricity.

Single on Epic label, released around the same time as the Captain Beefheart single: see the J-Files.

Boston band formed with fellow university students by Barry Tashian after he visited England and experienced 60s Britpop first hand. The Remains moved to New York, appeared on The Ed Sullivan Show and Hullabaloo, and toured with The Beatles in ’66, but never had a national hit. Barry Tashian published a book, Ticket To Ride: The Extraordinary Diary of the Beatles’ Last Tour, available through the official Remains website.

Not to be confused with The Re-mains, that fine Australian country rock band formed in 2002.

On 1966 album on Kommotion label, Just A Poor Boy.

The Bowery Boys were formed in Brisbane in 1965. Lead singer Mike Furber (1948-1973) was given top billing after they were signed to Ivan Dayman’s Sunshine label and management. After the band broke up in 1966, Mike Furber pursued an under-appreciated solo career, but in the early 70s he appeared to good notices in the gospel rock musical Godspell.

See also: You Stole My Love and Just A Poor Boy.

Further reading: Milesago’s Mike Furber page for the story of …the shy, sensitive and naïve young man who was chewed up and spat out by the frantic sixties Aussie pop music scene (Paul Culnane, Milesago).

On 1966 album on Columbia, The Twilights.

The song is sometimes attributed incorrectly to ‘A. Christensen’. This may date from some misprinted labels on Captain Beefheart’s 1966 single on A&M. See label shots at Captain Beefheart Electricity.

SIMILAR TITLE BUT NOT THE SAME SONG AS 'DIDDY WAH DIDDY' BY RUNNING JUMPING STANDING STILL. 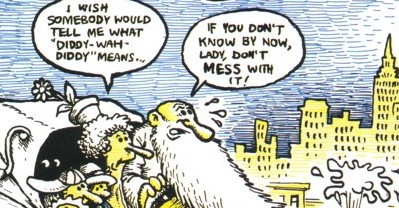 The two songs are easily confused, and the spelling variations don't make it any easier.

In summary, with the opening lines of each song:

Song #2 (Willie Dixon-Bo Diddley) I got a gal in Diddy Wah Diddy/ Ain't no town and it ain't no city…:

Running Jumping Standing Still's version has Got a girl called Diddy Wah Diddy/ Ain't no town, it ain't no city… which doesn't make as much sense, but in such a fine version I'm not quibbling.

NOT TO BE CONFUSED WITH 'DIDDY WAH DIDDY' BY RUNNING JUMPING STANDING STILL.

Also charted in 1990 by Australian band The Party Boys (#24 Adelaide).