Singer from Brisbane who hosted TV pop shows Uptight (from 1967) and Happening ’70. See also The Star. 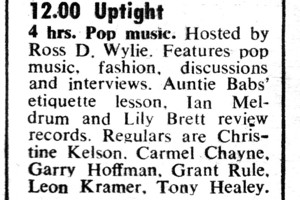 Single on Go!!, the last by Melbourne singer Bobby Cookson.

On HMV album Always Yours.

Single on Mercury label. Also on 1963 album This Is Ray Stevens.

This serious song contrasts with the zany comedy records that gave Ray Stevens many of his biggest hits: Ahab The Arab (1962, #5 USA), Gitarzan (1969, #8) and The Streak (1974, #1). The title of his first national Top 40 hit just about sums up the style of humour: Jeremiah Peabody's Poly Unsaturated Quick Dissolving Fast Acting Pleasant Tasting Green & Purple Pills (1961, #35).

On the other hand, he has often shown other sides to his talent, for example with the social commentary of Mr Businessman (1968, #28) and the sentimentality of Everything Is Beautiful (1970, #1). In 1974 he released his uptempo, banjo-driven version of Erroll Garner & Johnny Burke's Misty (#14 USA), a masterful transformation of a wistful jazz standard into an easygoing country song.