The Silhouettes, from Bendigo in Victoria, were formed in 1964. Claudette Jones was one of two Silhouettes tracks included on The Scene… Northern Victoria, a 1966 LP recorded in Melbourne by various artists from Bendigo and nearby towns.

In 1966, with a partially changed line-up, The Silhouettes became The Tol-Puddle Martyrs, whose keyboard-driven r&b sound and lyrics of social commentary made them one of the hippest and most popular bands in their region. They recorded two still highly-regarded singles, Time Will Come/Social Cell (1967) and Love Your Life/Nellie Bligh (1968). [Watch Time Will Come at YouTube.]

In recent years there has been renewed interest in The Silhouettes and The Tol-Puddle Martyrs, especially by aficionados of overlooked 60s beat/garage bands. Reissues, broadcasts and remakes of Claudette Jones have come from a number of independent sources, often beyond Australia.

Update 2017: Peter Rechter has continued to write and record, and in recent years has released further Tol-Puddle Martyrs albums. The latest, Polyphony (2017), is available on CD or as a download through CD Baby. Also available: Psych-Out USA (2007), A Celebrated Man (2009) and other releases. 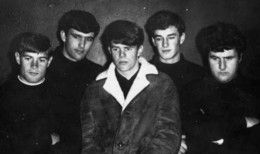 Peter & the Silhouettes, as seen on the album
cover of The Scene… Northern Victoria.

Peter Rechter's post-Tol-Puddle Martyrs band, first formed in 1977 as Ginger, became The Secrets in 1979. They disbanded in the 80s but were re-formed in 1996 by Peter with Graham McCoy, and continued to release fresh material into the early 2000s.

This was recorded at a Secrets session but has also been distributed with the old Tol-Puddle Martyrs name.

Track by Melbourne post-punk band on the various artists album Wild About You! A Tribute to the Australian Rock Underground (1963-1968), on Weather Records. The album also included a version of The Tol-Puddle Martyrs' Time Will Come by Pink Stainless Tail.

On album Contact by garage/punk/folk band on the Off The Hip label, by the record store of the same name at 381 Flinders Lane (via Tavistock Place), Melbourne.