The writers are Roy Lister, A&R man at Leeds Music who used the pseudonym Jack Aranda (get it?), and the country musician and producer Shad Lyons.

Marty Rhone: singer, songwriter and actor, real name Carl Van Rhoon (b.1948). In 1966 Spin Records teamed him with established Sydney band The Soul Agents. His later solo career was interrupted in 1970 when (like Normie Rowe) he was conscripted into the Australian Army for two years.

Below: The writers of Denim And Lace in August 1976: Roy Lister/Jack Aranda (centre) and Shad Lyons (2nd from right) with Sydney band Tempest at the Wentworth Hotel. The Aranda-Lyons composition Campbelltown had just won the Campbelltown Song Contest. 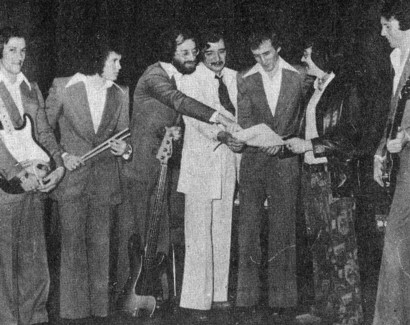 Thanks to Terry Stacey for research and archival material and to Mat Van Rhoon for updates.