Teenaged pop star Little Pattie’s real name was Patricia Amphlett (she is a cousin of Divinyls singer Chrissie Amphlett). Her career kicked off at the end of 1963 with a double-sided surf craze hit, He’s My Blonde-Headed, Stompie Wompie, Real Gone Surfer Boy backed with Stompin’ At Maroubra. She later moved on from the surf novelty with a number of well-chosen and well-produced songs: see, for example, Little Things Like That, Dance Puppet Dance and Pushin’ A Good Thing Too Far.

Further reading: 1. The definitive source on Little Pattie is Graeme Browne’s booklet on her career, available through OzMusicBooks. 2. Little Pattie: Stories and Highlights at Long Way to the Top [archived]. 3. Little Pattie entry at Wikipedia. 4. Patricia Thelma ‘Little Pattie’ Amphlett, OAM at Australian War Memorial’s Who’s Who in Australian Military History. 5. Citation for OAM for services to the entertainment industry, 2003. 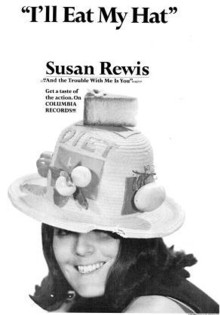 Darrell Glenn copyrighted I'll Eat My Hat in May 1966. The writer credit on both records shows "D. Glenn".

Darrell Glenn (1935-1990) recorded the original version of Crying In The Chapel, written by his father Artie (1953, #1 USA). That song was widely covered, notably by The Orioles, June Valli and Rex Allen, and an Elvis Presley version was a hit in 1965.

Among Darrell Glenn's own compositions is the 1967 Elvis Presley single Indescribably Blue (#33 USA).

Susan Rewis sometimes appears in the catalogues of vinyl dealers where some of her songs have attracted the "Northern Soul" tag. A demo of They Say You Found A New Baby was being offered for £156.00 in July 2010, around $AUS280.00 at the time.

Thanks to Terry Stacey for spotting the original and to Phil Milstein and Robert Pingel for confirming it.

SAME TITLE BUT NOT THE SAME SONG AS
'I'LL EAT MY HAT' BY LITTLE PATTIE.