Double-sided hit with I Just Need Your Love in Sydney & Brisbane.

Teenaged pop star Little Pattie's real name was Patricia Amphlett (she is a cousin of Divinyls singer Chrissie Amphlett). Her career kicked off at the end of 1963 with a double-sided surf craze hit, He's My Blonde-Headed, Stompie Wompie, Real Gone Surfer Boy backed with Stompin' At Maroubra. She later moved on from the surf novelty with a number of well-chosen and well-produced songs: see, for example, Little Things Like Thatand Pushin' A Good Thing Too Far.

Further reading: 1. The definitive source on Little Pattie is Graeme Browne's booklet on her career, available through OzMusicBooks. 2. Little Pattie: Stories and Highlights at Long Way to the Top [archived]. 3. Little Pattie entry at Wikipedia. 4. Patricia Thelma 'Little Pattie' Amphlett, OAM at Australian War Memorial's Who’s Who in Australian Military History. 5. Citation for OAM for services to the entertainment industry, 2003. 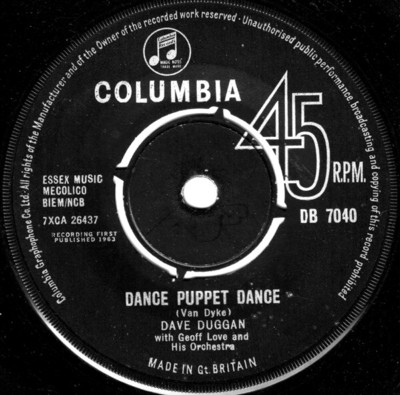 Single on Columbia #7040, with Geoff Love And His Orchestra. B-side: Just One More Dance (wr. Pilgrim).

British songwriter, singer and film composer Les Vandyke (b. Yani Skoradalides, 1931) also used the names John Skoradalides, Johnny Worth and John Worsley. He wrote many well-known songs of the 60s and 70s including significant hits for Adam Faith (What Do You Want, Poor Me) and Eden Kane (Well I Ask You, Forget Me Not). Ex-Shadows Jet Harris & Tony Meehan had a UK hit with his Applejack (1963, #4 UK).

Dave Duggan? I can’t find anything about him. I’m guessing he is not Irish writer Dave Duggan, born 1955, who would’ve been 7 or 8 when this was released.

Clues?
1. There was a Dave Duggan Skiffle Group active in the late 50s.
• A poster for a jazz concert at the Birmingham Town Hall on 17 October 1957 has The Dave Duggan Skiffle Group supporting The Cy Laurie Jazz Band.
• Michael Dewe in his 1999 PhD dissertation on The Skiffle Craze (a book came later) includes The Dave Duggan Skiffle Group in a long list of “skiffle groups playing in and around London in 1957”.
2. Peter Chapman, in Out of Time: 1966 and the End of Old-fashioned Britain (2016): This has a Chris Farlowe reference that is a bit puzzling as it’s hard to see where it fits in to his biography. Chapman writes that his uncle knew a Dave Duggan who ran a club in London’s Caledonian Road and who formed a band which he fronted until he was replaced by Chris Farlowe.

Thanks to Gerard Peet, for the discovery, and to Duane Hobden.

SAME TITLE BUT NOT THE SAME SONG AS 'DANCE PUPPET DANCE' BY LITTLE PATTIE.

On 1991 album Feel The Music, for children, on Disney label.