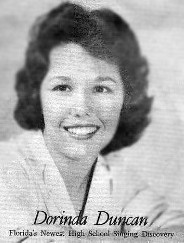 Dorinda Duncan went solo after leaving The Briarwood Singers, a Miami folk group that recorded for United Artists and opened for The Beatles at Carnegie Hall in 1964.

She had, however, released a couple of earlier solo singles on Orlando, Florida label Glendale (1960-61), one of which billed her as Florida's Newest High School Singing Discovery. 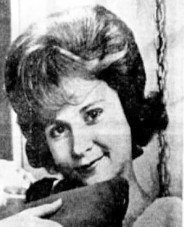 Chloee Harris was a 16-year-old student at Cohn High School in West Nashville when she recorded this, her first single, which was reviewed favourably in Billboard in June 1964. Later that month, Billboard reported that Chloe would be promoting her single in the UK. She released a second single on Hickory, I'm Having A Party / My Daddy Said (1965), but after that the trail seems to run cold.

Little People's B-side Mama, I'll Be Good was written by Jay Rainwater who was Harris's manager at this time. His co-writer on Little People was Nashville songriter Tommy Stough.

Writer credits to Rainwater and Stough are often found on the labels of Hickory, a division of the Acuff-Rose music publishing company. Tommy Stough has a repertoire of around 80 compositions at BMI,

with works recorded by Candi Staton and Porter Wagoner, among others.

Buell "Jay" Rainwater was singing star Brenda Lee's step-father, having married her widowed mother in 1955. Rainwater later worked at a Cincinatti record store where young Brenda made some of her first public singing appearances. By the 1960s he was a Nashville-based songwriter, producer and music publisher. He has around 60 compositions listed at BMI.

RED HERRING? A 1962 single by a Chloe Harris (one 'e') on New York mail order/song poem label Frank Records, Grandpa YouTube has a distinct country feel and could conceivably be a younger Chloee.

Single on Basic by 14-year-old Indiana singer who was encouraged to record Little People by co-writer Jay Rainwater after he heard her singing with her sister at a business convention.

The producer was Forrest E. "Buddy" Powell, Sue's father, using a home studio that he built himself. He had been recording his two daughters there since Sue was 8 years old, when their first single was pressed on Basic, a label created by Buddy Powell for that purpose.

The A-side is Jay Rainwater's Mama I'll Be Good, making this a double-sided remake of  Chloee Harris's 1964 single Little People / Mama I'll be Good, with the A- and B-sides reversed.