Double-sided hit in Brisbane with the B-side, Wake Me, Shake Me, a version of The Four Tops song (1966, #18 USA), a Holland-Dozier-Holland composition. YouTube 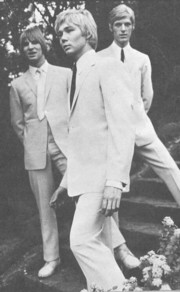 Melbourne vocal group The Virgil Brothers were not brothers, but nor were The Walker Brothers or The Righteous Brothers, the successful vocal groups who were clearly an inspiration.

Here I Am didn’t even register in Melbourne although Brisbane, always supportive of Peter Doyle and Python Lee Jackson, not to mention The Loved Ones, sent the single to number three.
– David Johnston, The Music Goes Round My Head (2010), p.225.

► For more on The Virgil Brothers, see their best-known record Temptation ‘Bout To Get Me (1968, #6 Brisbane #13 Melbourne).

Other singles by The Casinos do without an apostrophe in the group's name.

Some pressings have the title as Here I Am, also used on the Australian cover version.

The Casinos were a vocal group from Cincinatti who had one hit, Then You Can Tell Me Goodbye (1967, #6 USA YouTube), the much-recorded John D. Loudermilk composition. (You might recognise it by its prominent repeated line Then if it don't work out…) Gene Hughes, here given top billing, was lead singer for most of the group's career, including on their hit.

The writers.
Donna Weiss is a prolific songwriter and session singer who sang back-up on Mad Dogs And Englishmen. She is best known for Bette Davis Eyes, written with Jackie DeShannon, a big hit for Kim Carnes (1981, #1 USA). Weiss was nominated for Emmy and BAFTA awards for her song Crippled Crow, sung by Kris Kristofferson in A Star Is Born (1976) YouTube.

Ronnie Wilkins (b. 1941) had a long and prolific songwriting partnership with John Hurley (1941-1986). Their compositions, recorded by many major pop, soul and country artists, include Son of A Preacher Man (Dusty Springfield hit), and Love Of The Common People (Waylon Jennings, Paul Young and others).

SAME TITLE BUT NOT THE SAME SONG AS
'HERE I AM' BY THE VIRGIL BROTHERS.

Single on Scepter, from the soundtrack of What's New Pussycat? (1965). Dionne Warwick worked closely with the writers and often recorded the definitive versions of their songs. This was produced by Bacharach and David, arranged by Bacharach.

This is a ridiculously common song title.
Some other red herrings: