The Purple Hearts - Of Hopes And Dreams And Tombstones (1966)

The Purple Hearts emerged in Brisbane 1963-64 and removed briefly to Sydney before becoming a popular live band in Melbourne from 1966. Founding members Mick Hadley and Bob Dames, recent arrivals from the UK, had first-hand experience of the London R&B scene, and the band was strongly influenced by the likes of John Mayall, Graham Bond, the early Rolling Stones and through them, authentic American blues. Essential to the Purple Hearts' image as an uncompromising R&B band were vocalist Hadley and lead guitarist Barry Lyde, later known as Lobby Loyde.

This track seems to have acquired cult status, if the Big Beat/Ace anthology CD that uses its title is any indication.

See also Early In The Morning.

Further reading: 1. Interview with Lobby Loyde at Wild About You. 2. Purple Hearts by Mick Hadley at AintGotNoFeelin.com.

Thanks to Terry Stacey for starting this one off.

Jimmy Fraser - Of Hopes And Dreams And Tombstones (1965) 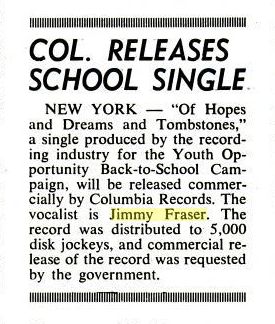 Single on Columbia October 1965, the commercial release of a track already distributed to radio stations to support a US Government program (see below).

The unknown Jimmy Fraser's public service single,1 about going back to school and getting qualified, unaccountably became an R&B classic in Australia when it was covered by The Purple Hearts.

See also Sorry by The Groop

Footnotes: 1. Billboard, 30/10/65 (Google Books). 2. C'mon Everybody at Wikipedia. 3. Joy Byers filmography at IMDb (includes songs wrirtten for Elvis films). 4. On Johnston's contribution to songs by Joy Byers songs see, for example, this page at B-Dylan.com, although a search for "joy byers" + "bob johnson" will throw up the same story at other sites.  5. Bob Johnston article at Wikipedia includes section Elvis and Joy Byers.

As you can see at 45cat.com, this was distributed to the "Program Directors and Disc Jockeys of America" with a message from Vice President Hubert H. Humphrey.

The name of the singer, Jimmy Fraser, is not mentioned but is replaced by the title of the program.