Melbourne singer Ronnie Burns emerged in 1964 as a member of Beatles influenced band The Flies, and went on to a successful solo career. After signing with Spin he benefited from his association with The Bee Gees, and he had several charting singles, usually with original songs by Australian songwriters.

Ronnie and his wife Maggie later ran the Appin Hall Children’s Foundation, their non-profit organization for children in crisis and distress.

From the 60s to the 90s, Ronnie hosted and produced several television programs, including his own creation, Prophecy & Prediction – Threat or Warning? In the late 90s he joined fellow music stars Russell Morris and Darryl Cotton to form Burns, Cotton & Morris. Along the way he ran an architectural and design company and wrote The Australian House Book.

In 2001, Ronnie was the subject of This Is Your Life, for which 2 million people tuned in to the Nine Network.

Opening track on the 1965 Parlophone album The Hollies.

Also released as a single in several countries including Sweden (charted #3), Norway, Germany, The Netherlands and Argentina.

Paul Culnane suggests at Milesago that this album track was the source of the Ronnie Burns version.

Thanks to Erik Alm. 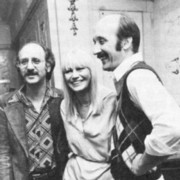 On the 1963 album In The Wind, on the United Artists label.

An EP version by The Bab's [sic] (France 1964) as Quand on quitte son pays had French lyrics by Pierre Delanoë.