The Whispers were a chart-topping Sydney band that originated in the surf music scene as The Nocturnes. After acquiring Ray Brown as their lead singer, they went on to become one of the most popular Australian bands of the British Invasion era. See full history at Milesago.

This B-side has become something of a cult classic in its own right. See, for example, the Milesago website: …2’15” of pure sonic adventure, one of those rare and extraordinary B-sides that almost eclipses the main event… Go To Him is one of the tracks on Ace Records’ Hot Generation: 1960s Punk from Down Under [Amazon

April 1965 single on Mike, a small independent label run by Eddie Matthews. This is the first release of the song (see my rules for "original version").

Many discographies wrongly date this as a 1966 release, but the single was reviewed in Billboard on 1 May 1965 (a 4-star "Spotlight Winner of the Week").

It seems to be rare even as a reissue. It appeared on Cicadelic Sixties Vol 3 which you might get second-hand on Amazon. 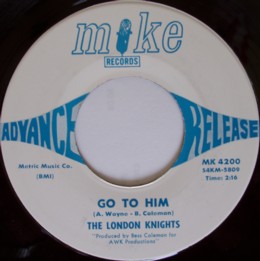 *THE FOURSIGHTS
Two members of Leicester's Foursights, Tim Airey and David Lindsay, have confidently identified this recording as the unreleased track they recorded in London late in 1963. David was the drummer and lead vocalist and he has no doubt that he is listening to his own singing on this track. In fact, he is certain that the artist on the B-side is a "different band, different style" with "very American accents". Similarly, Tim Airey on hearing the Mike recording: "I realised immediately that it was, in fact, The Foursights singing on the original demo from 1963. There was no mistaking Dave's voice."

There is no reason to doubt this. There is no fame or fortune to be had from claiming this obscure track on an obscure independent label from over fifty years ago. The songwriters have been properly credited all along, whatever the provenance of the audio. What happened between a later recording session with Bill Coleman (another Foursight, see below) and this release remains a mystery.

Recording session featuring Bill Coleman from Leicester band The Foursights, with the participation of Bill's sister Bess Coleman and her American songwriting collaborator Artie Wayne. Their copyright for Go To Him was registered in 1965 (US Copyright Office EU884345).

The masters were sold to Gene Schwartz at Laurie Records but were not released on Laurie.

Bill Coleman, a multi-instrumentalist, later recorded as The Willy Cole on a 1970 instrumental single, Right On / Pretty Good B Side, which he wrote and produced for Boggess-Wayne Productions (i.e. Howard Boggess & Artie Wayne).

Artie Wayne (1942-2019) also co-wrote Judy Stone’s Australian hit 4,003,221 Tears From Now and he wrote (and later recorded) Marcia Hines's From The Inside. Also known as Art Wayne, he was a prolific songwriter who also sang on his own records, for example on Where Does A Rock And Roll Singer Go? (1963) and on his own version of From The Inside. He and Ben Raleigh wrote Midnight Mary, a #10 Billboard hit for Joey Powers in 1963. Anyone who (like me) owned a copy of Keith's hit 98.6 (1967, #7 USA) would be familiar with the flipside, The Teeny Bopper Song, written by Artie Wayne & Jerry Ross.

Disambiguation: 1. This is not American jazz trumpeter Bill Coleman (1904-1981) 2. Coleman's pseudonym The Willy Cole should not be confused with the names of other artists called Willie Cole, including this one.

Unreleased in UK at the time, but apparently surfaced in 1965 on US label Mike (see above under London Knights). 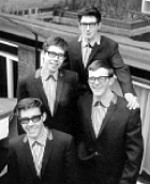 The Foursights travelled to London to record some demos, including Go To Him, after winning a talent competition.

One single on Columbia eventuated, But I Can Tell (1964) backed with And I Cry, both written by Bess Coleman.

The record company planned to release two of The Foursights' songs in the US using the name 'The London Knights', presumably to take advantage of the British Invasion craze.

Bess Coleman (c.1942-2014) was a British journalist who worked in PR for The Beatles and toured with them in 1964. She went on a second Beatles tour as a journalist in 1966. Her name is sometimes mentioned in Beatles contexts.

When Bess was working as a Beatles press officer in New York in 1964 she teamed up with US singer, songwriter and producer Artie Wayne, and they wrote a number of songs together at that time.

Bess Coleman moved to Australia in the 80s and ran a house restoration business with her husband. She died in 2014 in Kurrajong, north-west of Sydney.

References, further reading:
1. Tim Airey, the Foursights' bass guitarist (now deceased), reminisced at length about the band on his page at a now-defunct Leicester website. The page can still be read at the Internet Archive, although most of the images are missing. It includes comments by other band members.
2. Alastair Roxburgh has a brief profile of The Foursights at his Telegoons webpages.
3. Report on The Four Sights and their record release in Leicester Mercury, February 1964, reprinted as "On This Day: 50 Years Ago" in 2014.
4. Artie Wayne on meeting and writing with Bess Coleman, 2006 blog.
5. Bess Coleman profile and interview, "On Tour With The Fab Four" Leicester Mercury, 30 June 2009; see also similar content in "John, Paul, George, Ringo – and Bess", same date and source. Neither page mentions The Foursights/Four Sights.
6. "Former Beatles press officer dies, aged 72", Leicester Mercury, 28 July 2014.

Reference, further reading: 1. Pages at Northwest Music Archives, linked above. 2. This page at G45CENTRAL has an mp3 of the track.

SAME TITLE BUT NOT THE SAME SONG AS
'GO TO HIM' BY RAY BROWN & THE WHISPERS.

SAME TITLE BUT NOT THE SAME SONG AS
'GO TO HIM' BY RAY BROWN & THE WHISPERS.

Single on Hickory, B-side of She's Not A Bad Girl.

Further reading: An anonymous commenter at Kees's Obscure Singers blog offers this: Don Argo also used the name Tex Ashby. He was from Chattanooga, Tennessee. I don't remember his real name. He performed frequently at a club then known as "The Burger Ranch" on Hwy 58 outside Chattanooga. This was in the mid to late 60's.