Single on Interfusion (also in NZ), and in UK on Pye International. Charted Top 100 in the USA (single on Uni).

Recorded in Britain by English-born singer whose career kicked off as a teenager in Australia, where she had lived since the age of five.

The deep male voice on the recording belongs to Mike Sammes.

Arranged and produced by expat Australian John Farrar (ex-Mustangs and Strangers) and Bruce Welch (ex-Shadows), who in 1971 were members of Marvin, Welch & Farrar with ex-Shadow Hank B. Marvin.

From a popular bluegrass song of the 1930s, based on a traditional song. 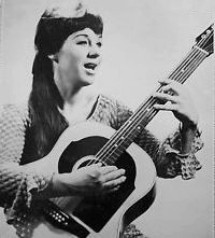 Track on the W&G album Lenore Somerset Sings by Melbourne-based folk and country singer often seen on popular TV shows in the 1960s. Lenore Somerset (1931-2006), née Miller, was from Queensland but moved to Melbourne in the late 50s. As a child she recorded with her uncle, the C&W singer Buddy Williams, and she had been with the Queensland Opera before moving to Melbourne.

Thanks to Bill Casey for version alert.

Olivia Newton-John cites Joan Baez as one of her favourite artists.

More information at Ballads from Deep Gap, NC and Okemah, OK, which points to the similarity with two other traditional songs, The Lone Green Valley and Omie Wise.