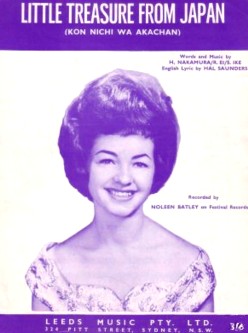 Single on Festival by Sydney pop star, known as 'Australia's Little Miss Sweetheart'. Noeleen Batley (b.1944) was most popular in Sydney, where she had nine charting singles 1960-1964, but her biggest hit was Barefoot Boy, an original release that was a hit all over Australia.

Little Treasure From Japan was released in Japan, and sold well enough for Noeleen to follow it up in 1965 with a Japanese-language record Owakare No Namida (Tears Of Farewell) and a promotional tour of Japan.

Konnichiwa Akachan was released in Japan in October 1963 and released as a UK Decca single in 1964 (as Kon-Nichi Wa Akachan). The title means Hello, my baby or Hello, little one.

This is an original song, not a traditional lullaby as some sources suggest.

Michiyo Azusa appeared in the 1964 film Konnichiwa aka-chan (aka Good Morning, My Baby) which had original music by co-writer Hachidai Nakamura. It's reasonable to assume the song was in the film.

Thank you to Hiroto Yanagida of the excellent Magic Town music website.