Single on Astor label, produced by Ron Tudor. The B-side was Susan Walks Away, an original by Aussie songwriter Peter Best, also the B-side in the US (see below).

Matt Flinders: singer, bassist, band leader and TV entertainer, born in Egypt of French-Italian-British background, in Australia since 1951. Formerly known as Louis Bonett, his adopted name would sound familiar to most Australians through the name of the explorer and chartmaker Matthew Flinders (1774-1814).

Released in the USA on Jerden label, Seattle, #J914, 1969. See Global Dog for an accurate Jerden discography. Other online Jerden discographies dating this record as 1967 are wrong. Australian Sheet music shows 1967, but this is the copyright date of the song.

Thanks to Terry Stacey, and to Tony through The Originals Problemsolving Forum.

Adeus Solidão was a breakthrough in the career of popular Brazilian singer Carmen Silva (1945-2016) after she won a major Brazilian TV contest Um Cantor por um Milhão, um Milhão por uma Canção ("A Singer for a Million, a Million for a Song").

Still a fondly remembered song in Brazil, going by the number of comments in Portuguese under the Matt Flinders version at YouTube.

Disambiguation: This is not the Brazilian actress Carmen Silva, aka Carmem Silva, who died in 2008 at the age of 92.

Single on RCA Victor YouTube by Cornelia Muller, born in Hamburg, Germany in 1950, in South Africa since early childhood.

This was the #2 best-selling song in South Africa for 1968 (see South Africa's Rock Lists).

Further reading: Cornelia biography at reverbnation.com. (One error: Johnny Curtis-Bobby Kerr was not an Australian.)

Johnny Curtis (b. Bobby Kerr) was a singer-songwiter from Glasgow who had sung with Bob Miller And His Band. He also recorded with Scotttish soul star Maggie Bell as Frankie & Johnny: listen to their single I’ll Hold You (Patterson-Bell-Kerr) at YouTube. Johnny Curtis died in a traffic accident in 1969.

Pickin' Up Pebbles was produced by Nick Firth who was the general manager in London of Acuff-Rose, the Nashville music publisher that also owned the Nashville record label Hickory. The musical director was Lew Warburton, credited on many British records as composer, conductor or arranger.

Following the launch of Acuff-Rose's London office in 1965, the company went into independent record production, with Nick Firth himself producing some British recordings of Acuff-Rose songs. These resulted in single releases by Mia Lewis and Jeff And Jon on Parlophone, The Cuppa T on Deram, The Art Movement on Decca, and Vincent Zarra on Columbia.

Apart from Picking Up Pebbles, Firth produced two earlier Johnny Curtis singles that were released on Parlophone: Our Love's Disintegrating/(I'd Be) A Legend In My Own Time (1966), and Jack In The Beanstalk/Go On Back (1967).

Acuff-Rose's Nashville label Hickory also released Curtis's Go On Back, a version of a Dan Fogel song first released on Hickory in 1966.

Nick Firth is the grandson of Louis Dreyfus, co-founder of Chappell & Co, Acuff-Rose's affiliate in the UK. He later became a prominent music publishing executive, notably as head of BMG Music Publishing Worldwide. 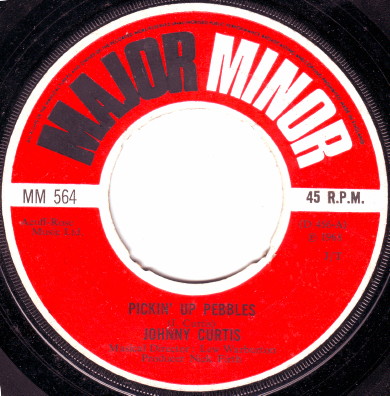 The song was copyrighted in 1967, according to the sheet music. In the US the copyright was registered in January 1969. 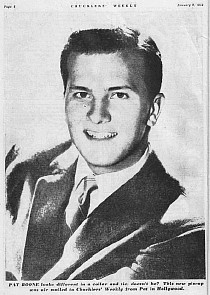 Single on Capitol YouTube by popular clean-cut 50s teen idol who had his first #1 hit in 1955 with a crooning version of Fats Domino's Ain't That A Shame. He finished his chart run in 1962 with Speedy Gonzales (#6 USA), his 38th Billboard Top 40 appearance, a cover of the more raucous original from the year before by David Dante, one of the song's writers.

Also on 1980 Pye single with a different A-side.