Single on Columbia. In Brisbane, this was a double-sided hit with the B-side, I Would If I Could, which also charted in Melbourne in its own right.

Marcie & The Cookies were a popular vocal group, often on TV and on tour at home and abroad. They were Marcie Jones with sisters Margaret, Beverley and Wendy Cook. 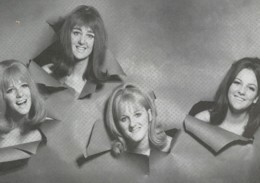 Marcie & The Cookies are heard on Russell Morris's classic hit The Real Thing.

Suggested by Mike Anderson. Thanks also to Terry Stacey.

Single on Atlantic, produced by Bert Berns, by r&b girl group formed in the early 60s. Bluebelles Nona Hendryx and Sarah Dash went on with Patti LaBelle to become 70s disco/funk/glam group Labelle (Lady Marmalade, 1975, #1 USA), but another founding member, Cindy Birdsong, had left to replace Florence Ballard in The Supremes in the late 60s.

See Radio London Fab Forties 21 November 1965 for discussion of the correct form of the group's name.

New York songwriters and producers Pam Sawyer and Lori Burton also wrote The Rascals' I Ain't Gonna Eat Out My Heart No More and Baby Let's Wait, the latter also recorded by The Royal Guardsmen (1968, #35 USA).