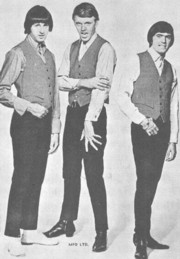 Double-sided hit in Melbourne with If You Were Mine.

Melbourne beat trio driven by a heavy rhythm section, formed in 1965. The ‘M’, the ‘P’ and the ‘D’ were for Mike Brady, Pete Watson and Danny Finley. Mike and Pete had met in Shadows-style band The Phantoms, and Danny had been drummer with another instrumental band The Saxons (see Pedro The Fisherman).

See also Little Boy Sad, Lonely Boy and You Might As Well Forget Him.

The record that launched the careers of two pairs of teenaged sisters from Queens who recorded for Leiber & Stoller's Red Bird label. They were usually produced by George 'Shadow' Morton who produced and co-wrote their next and biggest hit Leader Of The Pack.