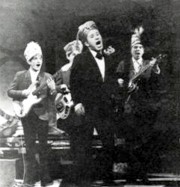 Single on Leedon, re-recording of Johnny O'Keefe's 1959 hit (see below), this time with Beatles-influenced Sydney band the Rajahs.

Co-charted in Adelaide with UK version by Lulu & the Luvvers.

See Kiss Me Now for more about The Rajahs, previously known as The R'Jays.

Image: J.O'K with The Rajahs.
Photo from Behind The Rock, with thanks.

Thanks to Mike Robbins, John Gambrill and Frank Calabrese for their help with this one through the Rock 'n' Roll Scars discussion group.

Co-charted in Adelaide with Australian version by Johnny O'Keefe.

Single on Roulette by singer from Passaic, NJ who was backed by frequently changing line-ups of The Starliters. This was his second biggest US hit after Peppermint Twist – Part 1 (1961, #1 USA).

Single on Leedon and on Lee Gordon.

Johnny O'Keefe (1935-1978), known in Australia as "The Wild One", "The King of Rock'n'Roll" or just "J. O'K.", was a pioneer Australian rocker, a chart topping artist in his home country. A TV mini-series about his life was made in 1985, Shout! The Story of Johnny O'Keefe. The definitive biography is Damian Johnstone's The Wild One (2001).

Michael Stanley emails: The original Shout 45 by Johnny O'Keefe and the Deejays on the Leedon label seems to be unavailable now. The version on all CDs is the version that appeared on the J.O’K. album 'Shout'. It's the same, but it has been 'processed' to add reverb that robbed it of the guts, if you like, of the single. The Leedon single did not suffer from this treatment.

Single on RCA by influential and enduring family r&b/soul/funk group first formed as a gospel quartet in the early 50s. Of their diverse repertoire, other songs that spring to mind include Twist And Shout (1962, not the original, but the hit version), This Old Heart Of Mine (1966) and That Lady Part 1 (1973), but for the full story – too long and complex to cover here – see Jason Ankeny's account at All Music Guide.

Shout grew out of the Isley Brothers' performance of the Jackie Wilson song Lonely Teardrops.

In Britain, it was the Isleys' version of Summer Breeze that charted, rather than the original by Seals & Crofts.

SAME TITLE BUT NOT THE SAME SONG AS
‘SHOUT’ BY JOHNNY O’KEEFE.

Sydney band, most of whose members had been in Melbourne band The Cheks.

SAME TITLE BUT NOT THE SAME SONG AS
‘SHOUT’ BY JOHNNY O’KEEFE.

Single on Cameo, "a Quill Records Inc. Production", by eight-piece showband originally formed in Hays, Kansas, active in the late 60s across Iowa, Kansas, Minnesota, Nebraska, Oklahoma and the Dakotas. ARSA has evidence of a little chart action in Sioux Falls, South Dakota.

Quill was an independent Chicago label and production company formed by Peter Wright.