The defunct French site Instromania had a personnel list and discography for The Devils (Il s’agit du groupe derrière Johnny Devlin): see the page at the Internet Archive.

Not all of Johnny Devlin’s records featured The Devils, though most of them did. For more on Johnny Devlin & The Devils, with links to further reading, see: Gigolo, I Was The One, Chi-Chico Teek, Stayin’ Up Late and Lonely Boy. 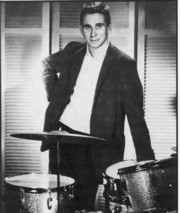 Single on Original Sound, then on on major label Top Rank, an instrumental featuring lead guitar built around the drumming of Sandy Nelson.

Thanks to Tony Watson.