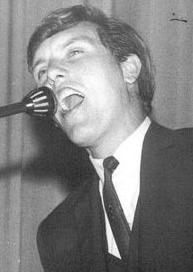 Single on W&G, B-side of Oh Donna, by Melbourne rock’n’roll singer and guitarist who released a handful of singles on W&G 1965-66 and appeared on the major TV pop shows, notably The GO!! Show. Farmer John was also on the W&G album Go Go Go.

Johnny Cooper started out in the early 60s with Melbourne bands The Mustangs and The Monarchs, and before going solo he was with The Saxons for a time as vocalist. He was a hard-working performer on gigs around Melbourne and beyond, and was still gigging well into the 2000s.

Johnny’s official site seems to be permanently offline, but you can still access an archived version at Internet Archive. It’s worth reading, not only for an honest account of Johnny’s career from his perspective but also for a glimpse of the music scene in 1960s Melbourne.

Not to be confused with… This is not New Zealand country singer-songwriter and rock’n’roll pioneer Johnny Cooper, notable for his early recording of Rock Around The Clock (1955).

Photo: Thanks to Johnny Cooper.

Thank you to Deidre for suggestion and leads.

Johnny with The Saxons at Channel 7, Melbourne. Image: Johnny Cooper.

Single on Olga, a hit in Sweden and Norway, by Sweden’s most popular group of the 60s. Benny Andersson, later of ABBA, was a member. Also released in USA on Cameo #376.

Single on independent label Faro March 1964, released for national distribution on Warner Bros in May 1964. The band's name is spelt Premieres on the drumkit seen in the Bandstand clip (right) but the singles have Premiers without the third 'e'.

Garage favourite by band from San Gabriel CA formed around brothers Lawrence and John Perez. The single was recorded in a studio but featured party-time background noises by the girls from the Chevelles Car Club.

On the Pye album Meet The Searchers and on the EP Ain't Gonna Kiss You.

Released as a single on Astor in Australia, this was a well-known track from the Merseybeat repertoire and probably had a greater impact here than the Premiers' version.

Don & Dewey first recorded Farmer John in 1957 in a slow version with a conventional, guitar-strumming arrangement, almost unrecognisable as the song we know. It remained unreleased until 1991, on the Jungle Hop CD, which includes both versions [Amazon].

In the 70s 'Sugarcane' Harris played violin with John Mayall and with The Mothers of Invention.

Arnold Rypens at The Originals lists versions by Michigan band The Tidal Waves (1966) and Neil Young (1990), among others. The Magnificent Seven topped the chart with Farmer John at WTBC in Tuscaloosa AL, 18 August 1966. No doubt there are other local examples.

On their LP And The Giggle-Eyed Goo. Also on the EP I Call My Woman Hinges.

Pop/r&b band Steve & The Board, formed in 1965, were led by Cincinnati-born Steve Kipner. They were produced by Steve's father Nat who was A&R man and a major producer at Spin Records where he was responsible for the Bee Gees' later Australian singles.

For more on Steve Kipner, see Steve & The Board – Rosalyn