Beatles-influenced Adelaide band The Twilights had several hits around the country 1966-68, from a repertoire that included band originals (If She Finds Out, Young Girl, Cathy Come Home) as well as cover versions (Larry Williams’s Bad Boy, The Velvelettes’ Needle In A Haystack).

Popular in Adelaide from 1964, The Twilights expanded their national audience when they relocated to Melbourne in 1965. As part of their prize in winning the national Hoadley’s Battle of the Sounds in July 1966, The Twilights were produced by Beatles engineer Norman “Hurricane” Smith at Abbey Road: see What’s Wrong With The Way I Live.

Twilights vocalist Glenn Shorrock and guitarist Terry Britten have followed long and diverse careers: Shorrock was famously with Axiom and Little River Band, and Britten’s compositions have been widely recorded, including We Don’t Need Another Hero and What’s Love Got To Do With It? by Tina Turner (both co-wr. Graham Lyle from Gallagher & Lyle). Milesago’s Twilights page has post-Twilights news of drummer Laurie Pryor and rhythm guitarist Peter Brideoake but loses the trail of vocalist Paddy McCartney and original drummer John Bywaters. Another founding member, Kevin Peek, found fame with pop-classical group Sky.

Motown vocal group The Velvelettes were never chart-toppers, and their output wasn't huge, but their popularity has endured with soul fans through CD reissues. Formed in 1961 with cousins Bertha and Norma Barbee, sisters Milly and Cal Gill, and Cal's friend Betty Kelly (later a Vandella), The Velvelettes were signed to Motown in 1962. 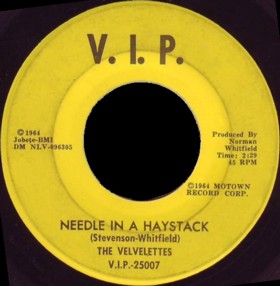 After a number of line-up changes, during which Cal Gill continued as lead singer, The Velvelettes broke up at the end of the 60s, but their reissued single These Things Will Keep Me Loving You (1966) charted at #34 in Britain in 1971.

Dusty Springfield - Needle In A Haystack

Recorded 1965.
Not released until 1996 on Mercury compilation album Something Special YouTube.