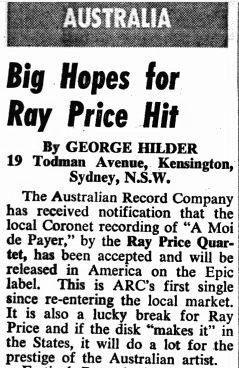 Sidney Bechet: New Orleans-born clarinettist and composer (1897-1959), one of the greats of jazz, who often worked in Europe and lived in France in later life.

From the soundtrack of the film Série Noire (1955), in which Sidney Bechet appears as himself.

The film includes a vocal version of this song with A Toi instead of A Moi.

Sidney Bechet's best-known composition outside jazz circles is probably Petite Fleur, a hit on the pop charts for Chris Barber in 1959.

SIMILAR TITLE BUT NOT THE SAME SONG AS "A MOI DE PAYER (THE PAY-OFF)" BY THE RAY PRICE QUARTET.

Other red herrings include: