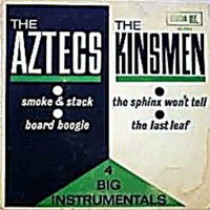 This is probably the group that became the long-lasting comedy entertainment group The Four Kinsmen.

The label of the single credits instrumental backing by Melbourne band The Kingsmen, and states RECORDED AT TELEVISION CITY MELBOURNE.

The Sphinx Won't Tell by The Kinsmen was also included on 4 Big Instrumentals, a 1965 EP that was shared with The Aztecs (on Linda Lee, by then distributed by Festival, #10-961). The two Aztecs tracks were from their first single, recorded before lead singer Billy Thorpe had joined them. It seems likely that The Sphinx Won't Tell, a vocal track, was included to round out the four tracks of this "instrumental" EP.

Thanks to Colin Duff for clarification.

On the live album Campus Encore.

Vocal harmony group The Four Preps had two big hits in 1958, 26 Miles (#2 USA) and Big Man (#3), both group originals. Their harmonies were an influence on Brian Wilson and the Beach Boys.

B-side of Goodnight My Someone, single on Columbia, #DB4587.

The Beverley Sisters were actual sisters, a British vocal trio in the Andrews Sisters mould, popular in the 50s and 60s. They were signed to Columbia in 1951 and became "the highest paid female act in the UK" and "the first British female group to break into the US top 10" [BBC News story about their MBE awards, 2005].

References: 1. Beverley Sisters entry at Wikipedia and items linked from there at The Stage and BBC News.

Single on Cadence, also on London in the UK.

Classically trained pianist-composer Charles Strouse (b.1928) and journalist Lee Adams (b.1924) met in 1949 and wrote songs together during the 50s before the success of their hit rock’n’roll satire Bye Bye Birdie (1960) and a string of other musicals.

One of their most heard collaborations is the song Those Were The Days, the theme of the TV series All In The Family (Boy, the way Glen Miller played/ Songs that made the hit parade/ Guys like us, we had it made/ Those were the days…).

Strouse’s credits also include the music for Annie and its sequels, and the scores for Bonnie & Clyde and other films. The Poni-tails’ 1958 hit Born Too Late (#7 USA) was written by Charles Strouse with Fred Tobias.

B-side from 1982, collected on The Best Riffs Only, a collection of rarities 1977-1988 by eclectic San Antonio TX band formed 1975 and still releasing albums through to 2010. As AMG’s Mark Deming tells it, they are one of the American Pop Underground’s best-kept secrets for more than three decades.