This was also issued on a Sunshine EP March Of The Mods in 1967, with two tracks by The Aulton Mob on one side and two by The Blue Jays on the other. It is plausible that The Blue Jays could have participated in all four tracks.

Finnjenka is related to a traditional Finnish party dance, the basis of a dance craze originating in Finland in the mid-60s: see below under JAN ROHDE and RONNIE KRANCK.

The Pat Aulton Mob also released a recording of the Theme From This Day Tonight (the current affairs TV program) in 1964. See discography at Instromania.

Suggested by Ron Nordberg. Thanks to Frank Calabrese through Rock&Roll Scars discussion group.

Single on HMV, around October-November 1964. Arranged for Joe Loss by Leslie Vinall, vocalist with the Loss band.

March Of The Mods may remind some listeners of the Theme to The Addams Family (1964), composed by Vic Mizzy who performed it on the soundtrack of the TV series with Dave Kahn and Ted Cassidy: see the FAQ at The Unofficial Addams Family Site.

Single on Columbia, around July-August 1964.
Not the well-known Australian band of the same name.

The Executives were a Blackpool band who recorded a handful of singles. 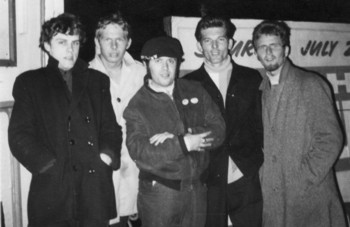 March of the Mods was written by Tony Carr, the father of Executives frontman Roy Carr. A friend of the band at the time, Robert Owen, recalls that Tony Carr was a hairdresser by profession, with connections going back to the big band era.

Roy Carr himself became well-known as a music writer with New Musical Express and other magazines, and as the author of several books on popular music including Beatles at the Movies and A Century of Jazz. He later became executive editor of music magazines published by the IPC Group, including NME and Uncut. For more details of Roy Carr’s varied career, see Richie Unterberger’s account at All Music Guide.

Tony Williams, The Executives’ guitarist, joined Stealers Wheel soon after its formation in 1967. He also joined Jethro Tull for a while in 1978.

References: Blackpool reminiscences of Robert Owen (email); Pages on The Executives, Glenn Cornick and Tony Williams at Collecting Jethro Tull; Entries for Roy Carr at All Music Guide and Wikipedia; other pages linked above.
Further reading: Glenn Cornick’s website; Executives bio (in Polish) at Rock klasyczny i progresywny.
Thanks to Stewart Edwards for nailing the original, and to Robert Owen for key information and photo.

]. The third of three Jive Bunny party mix #1s in the UK in 1989, after Swing The Mood (also a big hit in Australia) and That’s What I Like.

For a connection between bunnies and finnjenka, see above under RONNIE KRANCK’S ORCHESTRA.

Jive Bunny & The Mastermixers - March of the Mods

SIMILAR TITLE BUT NOT THE SAME SONG AS 'MARCH OF THE MODS (FINNJENKA DANCE)' .

THE ORIGINAL FINNISH JENKA HIT, AN INFLUENCE ON JAN ROHDE'S 'FINNJENKA', BUT NOT THE SAME SONG AS 'MARCH OF THE MODS (FINNJENKA DANCE)'.

A popular and much-recorded instrumental in the traditional Finnish jenka style, also a type of linedance similar to the Bunnyhop and traditionally known as letkajenka. Composer Rauno Lehtinen apparently played sax on this recording which influenced Jan Rohde's Finnjenka (1964).

Arnold Rypens writes at The Originals that this was a dance craze in Finland at the time, incorporating steps based on the Madison, the Conga and the Bunnyhop. Letkiss was subsequently recorded in over 90 countries in one form or another: many are listed at The Originals Letkiss page.

Composer Rauno Lehtinen himself recorded this in 1964 with his Finnish Letkiss All-Stars, engineered by Ronnie Kranck.

Thanks to Butcher Pete Hoppula at Wang Dang Dula! and to Joop Jansen via The Originals.