Peter Posa And His Golden Guitar - The White Rabbit (1963) 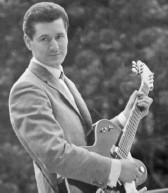 Hit instrumental single on Viking (NZ), also released on W&G in Australia and on Interphon (1964) in the USA.

Peta Posa (1941-2019) was from Henderson, in western Auckland, where his Yugoslav immigrant parents were wine growers. He was a star in New Zealand, a prolific and popular instrumental guitarist whose earliest influences were 40s-50s country artists and the electric guitar innovator Les Paul.

The White Rabbit was submitted to Viking Records by its writers, Auckland musicians Bill Ivory and Graham Rosling, and worked up by Posa in his own style.

Prolific NZ lyricist Sam Freedman (1911-2008) later wrote lyrics for The White Rabbit that were published in a lyrics booklet, Peta Posa: His Greatest Hits (1965), along with five other Peter Posa tracks. I haven’t found any evidence that a vocal version was ever recorded, apart from the version in Danish listed below.

* National charts were not available in New Zealand at this time, apart from some magazine lists that probably did not reflect actual popularity or sales. The White Rabbit was clearly a popular record, even if we don’t have any hard figures.

The extra writer credits are to Danish lyricist Jack Barry (b. Jørgen Winckler), and to NZ lyricist Sam Freedman, who wrote lyrics for The White Rabbit. This suggests that Barry's Danish lyrics were a translation of Freedman's.