Recorded in USA by Australian singer Lynne Randell (1950-2007), a former Melbourne hairdresser born in Liverpool UK, who toured the US on the same bill as The Monkees and Jimi Hendrix. Her biggest Australian hit was with the Larry Weiss-Scott English song Ciao Baby (1967), recorded in New York

Single on ABC #11112, not released in Australia, B-side of An Open Letter. Arranged and produced by Ernie Freeman. (Copies for sale online are often a reissue on the SC label, #1002.)

Thanks to David Johnston and Mike Robbins.

Single on Shout by highly regarded soul and gospel singer, less well-known than her sister Aretha but given recognition in recent years through reissue CDs.

Erma Franklin (1938-2002) recorded the original version of Piece Of My Heart (1967), popularised by Janis Joplin with Big Brother & The Holding Company.

Track on 1968 album Pumpkin, Powder, Scarlet & Green by Chicago band best known for their hit with the Larry Weiss-Scott English song Bend Me, Shape Me (1967, #5 USA). Members of The American Breed were later in the 70s funk band Rufus. 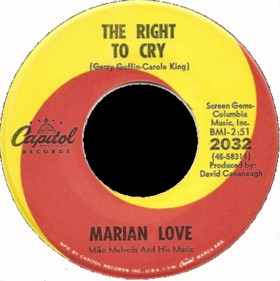 Marian Love was a promising jazz singer from Kansas who recorded some singles and an album for Capitol but quit the music business for teaching.

Single on Capitol, with Mike Melvoin and his Music. Produced by David ‘Big Dave’ Cavanaugh (1919-1981), a tenor saxophonist who worked at Capitol from the early fifties in several roles, including A&R man, producer, arranger and composer.

References: 1. Marian Love biography at All Music Guide. 2. Single review and label shot by Steve Guarnori at TooDarnSoulful.com (pdf). 3. Profile of David Cavanaugh at Interlude Era e-zine (the Wikipedia entry seems to be drawn from this).
Further reading: All Music Guide biography of Mike Melvoin. Melvoin’s official site is at MikeMelvoin.com. Marian Love is not listed among the numerous artists he has worked with.

Single on Kapp. Reviewed in Billboard 18 March 1967. It seems to pre-date Marian Love’s version by a few months.

Lenny Welch (b. 1938) first recorded without success for Decca before switching to Cadence for his one big hit, a 1963 #4 revival of Since I Fell For You, the much-recorded Buddy Johnson song from 1945. As Andrew Hamilton tells it at All Music Guide, Welch’s career never recovered from its interruption by military service and by the closure of Cadence in 1964.

Thanks to Gerard for setting the record straight on this one. Gerard’s page on The Right To Cry is at Multiply.com (register and log in to hear playlist).