Lynne Randell (1950-2007), born in Liverpool UK, was an aspiring singer working as a hairdresser in Melbourne when she got her first big break. She toured the US on the same bill as The Monkees and Jimi Hendrix and recorded Ciao Baby (1967), her biggest Australian hit, in New York. 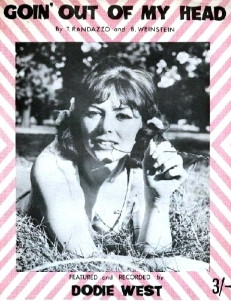 Single on Decca by British singer Dodie West, real name Doreen Bull, from the South Tyneside town of Hebburn in North East England. She sang with local band The Cougars before going solo and moving to London. There was at least one Dodie West album on Decca before she switched to the Pye subsidiary label Piccadilly for three further singles in 1965. Another single was released on Philips in 1968.

IMDb lists some appearances on British TV 1965-1966, including one on the major pop show Ready, Steady, Go! She was something of a regular on Stars and Garters, an ATV variety show.

Further reading: The best source I’ve seen is the forum thread on Dodie West at JarrowLife.co.uk. The September 2010 post by Hartmann has an informative cutting from local paper The Shields Gazette. Listen: Audio of Dottie West’s 1965 single ‘In The Deep Of The Night’ can be found at YouTube.

Not to be confused with the US country singer Dottie West. And The Cougars that Dodie West sang with are probably not the band of "Saturday Nite at the Duck Pond" fame who were from Bristol.

The Little Anthony & the Imperials song paired with a Frankie Valli hit, recorded by easy listening harmony trio who first charted in 1961 with The Way You Look Tonight and When I Fall In Love.