Single on Philips by iconic star of Australian music and TV over several decades. Kamahl's full name is Kandiah Kamalesvaran. He is of Sri Lankan background, a naturalised Australian born in Malaysia in 1937 who originally came to Australia in 1953 for secondary schooling in Adelaide. His official site is at kamahl.com.

Suggestion from John Yeager.
Thanks to Chris Vening and Dave Overett.

On ABC album Ray Pillow Sings Wonderful Day. Ray Pillow (b.1937) is a country singer from Lynchburg, Virginia who worked in Nashville from 1961. He became a long-standing Grand Ole Opry member and sucessfully moved into music publishing and management. He has a biographical webpage at raypillow.com.

Single on A&M by prolific and versatile soul-pop-jazz singer and actor, born in Richmond VA (1934) but living in New York from his late teens. For some of the early 60s he lived in Paris where he recorded as Tony Milton and toured European jazz venues.

Before going solo in the late 50s, Tony Middleton was in New York vocal group The Willows, with whom he wrote their single Church Bells May Ring (1956), quickly covered by The Diamonds (1956, #14 USA). His musical stage work includes the 1964 off-Broadway revival of Cabin In The Sky. He is known by many for the single Paris Blues (1966), a Northern Soul favourite [YouTube].

On Columbia album For Once In My Life by Louisiana-born jazz, country, r&b and soul singer (1932-2001) who had been a vocalist with the Count Basie Band in the early 60s. He had hits on the mainstream charts with The Son Of Hickory Holler's Tramp (1968), Little Green Apples (his biggest hit, #2 USA, 1968) and Daddy's Little Man (1969) before moving into Christian ministry and forming his own church.

Reference: O.C. Smith biography by Ron Winn at All Music.
Thanks to Chris Vening for version alert.

Country singer Charlie Louvin (1927-2011) was from Alabama. A cousin of John D. Loudermilk, his birth name was Charles Elzer Loudermilk. After being one half of the influential harmony duo The Louvin Brothers from the early 40s, he went solo in 1963.

The third competitive version of Sounds Of Goodbye joins the race via a highly attractive performance by The Gosdin Brothers. Although the other versions have a sizeable head start, this… may serve to close the gap – Cash Box 24 Aug 68

Progressive bluegrass/country-rock outfit associated with The Byrds, for whom they sometimes opened. Vern and Rex Gosdin were in The Hillmen with future Byrd Chris Hillman, and they recorded an album with Gene Clark in 1966, after he left The Byrds. (AMGC)

Another excellent version of a topnotch piece of music… Competition with Sounds Of Goodbye may provide quite an interesting view from the sidelines. – Cash Box 17 Aug 68.

With one of the best pieces of material he's had in a while, Tommy Cash makes a good bid to finally break into the big picture. – Cash Box 10 Aug 68

A week later, George Morgan's single was reviewed, and the two versions followed each other up and down the Cash Box and Billboard country charts.

Tommy Cash (b.1940) is a younger brother of Johnny Cash. His official site is at tommycash.com.

Further reading: 1.Tommy Cash biography by John Bush at All Music. 2. Eddie Rabbitt at Nashville Songwriters Hall of Fame. 3. Dick Heard as songwriter and as producer, at 45Cat. 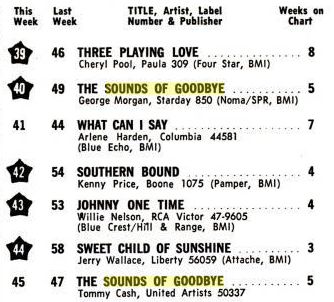