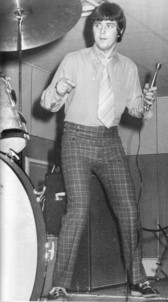 All My Lovin’ later became identified with Johnny Young after he used it as the closing song for his long-running TV series Young Talent Time (1971-1989).

Although his own hits (Step Back, Cara-Lyn, Kiss Me Now) were written by others, Johnny Young’s main claim to pop fame internationally is for having written the Russell Morris classic The Real Thing. See also The Star, recorded by Ross D. Wylie and by Herman’s Hermits.

Vocal duo, brothers from Bournemouth, influenced by The Everly Brothers, signed by Joe Meek: see Bruce Eder’s outline at All Music Guide, and the singles discography at 45.rpm.org.uk.

On the 1963 album With The Beatles. First released in the US on Meet The Beatles! (1964). Details at beatles-discography.com.

It was the 1964 EP All My Loving that charted: details at DM’s Beatles Site.

Ross Clement lists nearly 30 versions of All My Loving at his Beatles covers page (though not Johnny Young’s), and no doubt there are others. Among the less obscure artists are Annette Funicello, The Hollyridge Strings, Herb Alpert, Count Basie, The Brothers Four, Sonny Curtis, Duke Ellington, Matt Monro, The Sandpipers, Jimmy Tarbuck, Max Bygraves, and Frank Sinatra.