The powerful baritone of Newcastle (NSW)-born Doug Parkinson (1946-2021) became known nationally through his records with In Focus from the end of the 60s.

Earlier, he had fronted Sydney folk-pop band The A Sound (formerly Strings and Things) whose sole single features an almost unrecognisable, lighter Doug Parkinson, but it was with highly regarded Sydney pop band The Questions that his soulful, slightly mannered vocal style came into its own.

In Focus was formed in 1968 with personnel from The Questions and became a popular live band that relocated to Melbourne and had national hits that included Dear Prudence, Without You/Hair and Baby Blue Eyes.

After In Focus, Doug Parkinson sang with bands that included Fanny Adams, a briefly reunited In Focus (1971) and The Southern Star Band. His long-lasting solo career has produced charting singles Everlasting Love (1974) and The Sun Ain’t Gonna Shine Any More (1981). He has also appeared in rock musicals and recorded radio and TV jingles.

On the album The Beatles, aka The White Album.

Click on the album cover to go to
DM’s White Album page: 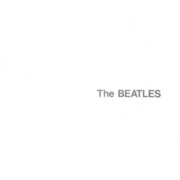