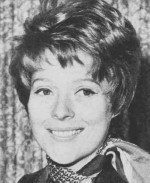 Single on W&G YouTube July 1958, the first by Australian singer from Melbourne who was soon to establish a successful career in the USA.

When she moved to America in 1959, nineteen-year-old Diana Trask (b.1940) had appeared regularly on Australian TV and radio, and had toured with major visiting artists. She initially appeared at New York's Blue Angel nightclub before becoming a regular on Mitch Miller's high-rating TV show Sing Along with Mitch YouTube.

Her second single, Soldier, Won't You Marry Me (#35 Melbourne) was released in September 1959 on US label Roulette, and in October on Leedon in Australia.

Her first album, Diana Trask, arranged and produced by Glenn Osser, came out on Columbia (USA) early in 1961. It was followed the same year by an album with Mitch Miller's chorus. (Nowadays the Diana Trask album appears as Vocal Jazz Classics on streaming services).

After a return sojourn in Australia, Trask emerged in the late-60s and throughout the 70s as a successful country singer, living and recording in Nashville. Her breakthrough album was Miss Country Soul (1969) on Dot.

Frank Sinatra has often figured in Trask's story, as a romantic attachment or as a facilitator of her American career. She was a support act on his 1959 tour of Australia, and he appears to have encouraged her move to the US. She has denied that there was any romance, and has asserted that it was her agent, not Sinatra, who got her the breaks in the US. Even so, her image would have been enhanced by stories about Sinatra "discovering" her, and his attendance at her Blue Angel opening.

NEW YORK – Our buddy Frank Sinatra, the boy from Hoboken, always livens up our village. He took 15 dinner guests to the Colony, and then all who could stand were taxied over to the Blue Angel. There they saw his pretty Australian discovery, Diana Trask…
– Earl Wilson's syndicated showbiz column, August 1959.)

From the soundtrack of Going Steady (released February 1958). Molly Bee had a leading role in the film.

Also released in UK and Australia with the title Going Steady (With A Dream).

The writers: Quine and Karger collaborated on several songs, most of them film tie-ins. Richard Quine (1920-1989) was an actor, director, singer, composer and lyricist who had been a child actor in the 1930s. Fred Karger (1916–1979) has many musical film credits including composer, music supervisor, and conductor. He was a Hollywood vocal coach, notably to Marilyn Monroe. (Not to be confused with US political figure Fred S. Karger, born in 1950.)