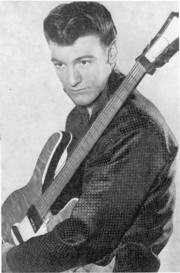 Single on Festival, Sydney, notable for being the first Australian-made pop record of the rock era to chart nationally at #1.

Col Joye was a pioneering Aussie pop star of the rock’n’roll era (b. Colin Jacobsen, 1937) who in 1957 joined his brother Kevin’s jazz band that was to become Col Joye and the Joy Boys. He had ten Top 10 hits in the Sydney charts alone from May 1959 to May 1962, including four #1s, and was a star on television pop show Bandstand. Something of a legend in Australia, his rock’n’roll suit is in the collection at Sydney’s Powerhouse Museum.

Single on RCA Victor, B-side of To The Valley. The songwriters are Mickey & Sylvia, using pseudonyms.

Thanks to Tony Watson for initial research.